**This event was originally scheduled for April 13 at 7pm ET but due to unforeseen circumstances, we've had to postpone. This event will now take place on Monday May 10th, please join us!**

Join Porter Square Books in welcoming volcanologist, extreme explorer and field scientist Jess Phoenix for a virtual talk about her new memoir, Ms. Adventure: My Wild Explorations in Science, Lava, and Life! This event is free and open to all, hosted on Crowdcast. 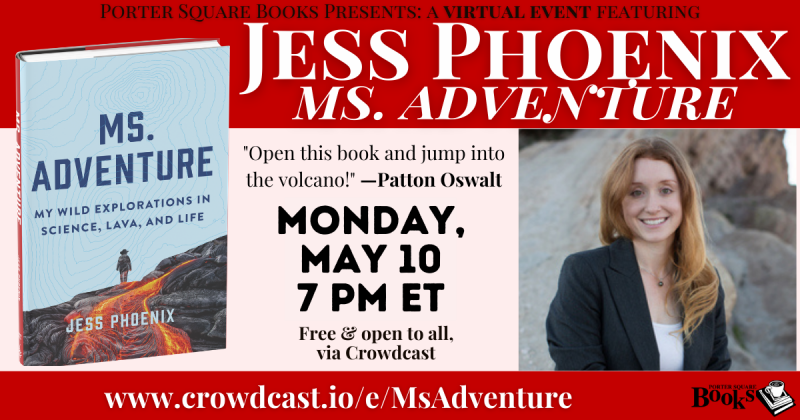 Register for the event on Crowdcast here: https://www.crowdcast.io/e/MsAdventure

"Jess Phoenix's work encompasses science and representation in such a delightful melding that it could only come from as spry and playful a soul as hers! Open this book and jump into the volcano!" —Patton Oswalt

As a volcanologist, natural hazards expert, and founder of Blueprint Earth, Jess Phoenix has dedicated her life to scientific exploration. Her career path—hard earned in the male-dominated world of science—has led her into still-flowing Hawaiian lava fields, congressional races, glittering cocktail parties at Manhattan’s elite Explorers Club, and numerous pairs of Caterpillar work boots. It has also inspired her to devote her life to making science more inclusive and accessible.

Ms. Adventure skillfully blends personal memoir, daring adventure, and scientific exploration, following Phoenix’s journey from reality television sites deep in Ecuadorian jungles to Andean glaciers, university classrooms to Death Valley in summer. She has even chased down members of a Mexican cartel to retrieve a stolen favorite rock hammer. Readers will delight in her unbelievable adventures, all embarked on for the love of science.

Jess Phoenix is executive director and co-founder of the environmental scientific research organization Blueprint Earth. Since 2008, she has been a volcanologist, an extreme explorer, and a professional field scientist. She works with universities and major research institutions to study lava flows and natural hazards, perform climate research on glaciers, and more. Jess is a fellow in the Explorers Club and the Royal Geographical Society; a featured scientist on the Discovery and Science channels; and her writing has appeared on websites such as BBC Online, DailyKos, and Medium, as well as in Face the Current magazine and local print publications.

Register for the event on Crowdcast here: https://www.crowdcast.io/e/MsAdventure