Porter Square Books is delighted to welcome back friend of the store and bestselling author Jonny Sun for a virtual talk to celebrate the release of his highly anticipated new book, Goodbye, Again: Essays, Reflections, and Illustrations! This event is free and open to all, hosted on Crowdcast. **Signed copies of the book are available!! All preorders and books ordered at the event will be signed. We will have a limited supply of pins and the first 20 pre-orders from this event page will receive a pin with their orders!** 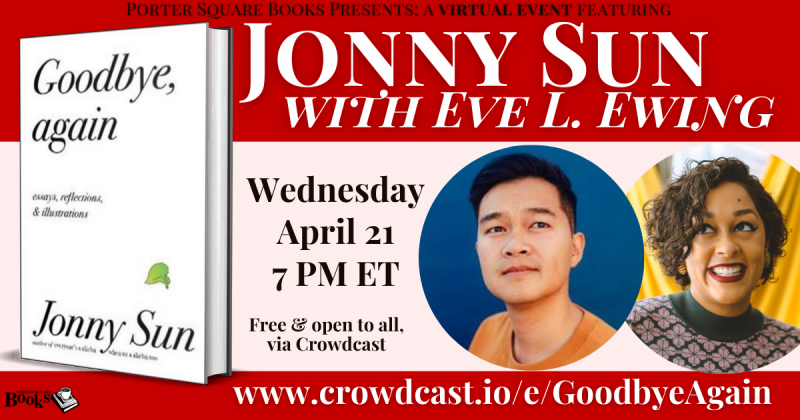 The wonderfully original author of Everyone's a Aliebn When Ur a Aliebn Too gives us a collection of touching and hilarious personal essays, stories, poems—accompanied by his trademark illustrations—covering topics such as mental health, happiness, and what it means to belong.

Jonny Sun is back with a collection of essays and other writings in his unique, funny, and heartfelt style. The pieces range from long meditations on topics like loneliness and being an outsider, to short humor pieces, conversations, and memorable one-liners.

Jonny's honest writings about his struggles with feeling productive, as well as his difficulties with anxiety and depression will connect deeply with his fans as well as anyone attempting to create in our chaotic world.

It also features a recipe for scrambled eggs that might make you cry.

Jonny Sun is the best-selling author and illustrator of everyone’s a aliebn when ur a aliebn too and the illustrator of Gmorning, Gnight! by Lin-Manuel Miranda. He was a writer for the Emmy-nominated sixth season of the Netflix Original Series BoJack Horseman, and is currently writing a movie, a new book, and multiple other projects. As a doctoral candidate at MIT and a creative researcher at the Harvard metaLAB, he studies social media, virtual place, and online community. He has a master’s degree in architecture from Yale and a bachelor’s degree in engineering from the University of Toronto. TIME Magazine named him one of the 25 Most Influential People on the Internet of 2017, and in 2019, he was named to the Forbes 30 Under 30 list, and gave a TED Talk that has been viewed online over 3 million times.

Dr. Eve L. Ewing is a sociologist of education and a writer from Chicago. She is the award-winning author of the poetry collections Electric Arches and 1919 and the nonfiction work Ghosts in the Schoolyard: Racism and School Closings on Chicago's South Side. She is the co-author (with Nate Marshall) of the play No Blue Memories: The Life of Gwendolyn Brooks. She also currently writes the Champions series for Marvel Comics and previously wrote the acclaimed Ironheart series, as well as other projects. Ewing is an assistant professor at the University of Chicago School of Social Service Administration. Her work has been published in The New Yorker, The Atlantic, The New York Times, and many other venues. Her first book for young readers, Maya and the Robot, is forthcoming in July 2021.

Order your signed book below!