Join us for a virtual talk with Julie DiCaro, author of Sidelined: Sports, Culture, and Being a Woman in America, joined in conversation by local journalist and writer Melissa Ludtke! This event is free and open to all, hosted virtually on Crowdcast. 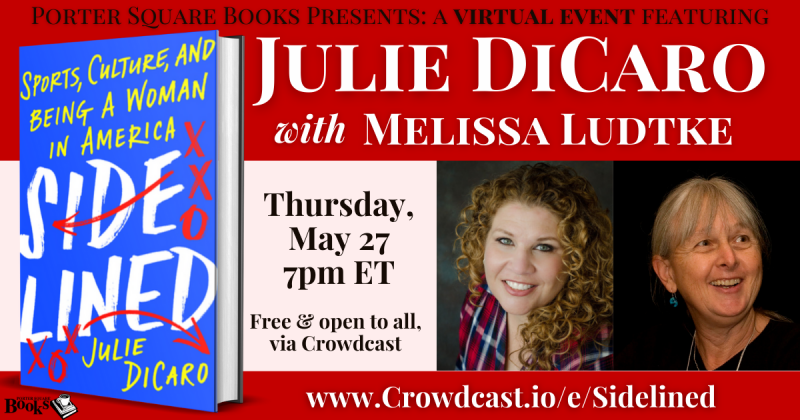 Shrill meets Brotopia in this personal and researched look at women's rights and issues through the lens of sports, from an award-winning sports journalist and women's advocate

In a society that is digging deep into the misogyny underlying our traditions and media, the world of sports is especially fertile ground. From casual sexism, like condescending coverage of women’s pro sports, to more serious issues, like athletes who abuse their partners and face only minimal consequences, this area of our culture is home to a vast swath of gender issues that apply to all of us—whether or not our work and leisure time revolve around what happens on the field.

No one is better equipped to examine sports through this feminist lens than sports journalist Julie DiCaro. Throughout her experiences covering professional sports for more than a decade, DiCaro has been outspoken about the exploitation of the female body, the covert and overt sexism women face in the workplace, and the male-driven toxicity in sports fandom. Now through candid interviews, personal anecdotes, and deep research, she's tackling these thorny issues and exploring what America can do to give women a fair and competitive playing field in sports and beyond.

Covering everything from the abusive online environment at Barstool Sports to the sexist treatment of Serena Williams and professional women's teams fighting for equal pay and treatment, and looking back at pioneering women who first took on the patriarchy in sports media, Sidelined will illuminate the ways sports present a microcosm of life as a woman in America—and the power in fighting back.

Julie DiCaro is a sports journalist and editor at Deadspin, and a former attorney. Her writing has appeared in outlets including The New York Times, The Washington Post, Vice Sports, The Establishment, and HuffPost. An outspoken critic of sexism in the media and online harassment, DiCaro joined with ESPN’s Sarah Spain in 2016 to create the viral video #MoreThanMean, for which she won a Peabody Award, a 2017 Gracie Award for Women in Media, a Clio Sports Grand, and many other awards. She also received a 2019 Gracie Award for her work in Chicago sports talk radio. She lives in the Chicago suburbs.

When Melissa Ludtke was 26 years old, she challenged Major League Baseball in federal court – and she won. The charge was gender discrimination. The result: By pursuing her rights under the Equal Protection Clause of the Fourteenth Amendment, women sports reporters gained equal access to team locker rooms where their male colleagues had worked for decades. From then on, girls who loved sports and wanted to report on games knew they could. Melissa is an award-winning journalist who worked at Sports Illustrated, Time, CBS News and the Nieman Foundation for Journalism at Harvard University, where she edited Nieman Reports. She received the 2010 Yankee Quill Award for lifetime achievement as a journalist and was awarded fellowships at Harvard University, Radcliffe College, and the Columbia University’s Graduate School of Journalism where she studied and wrote about social issues with an emphasis on women, children and families. Random House published her book “On Our Own: Unmarried Motherhood in America,” in 1997 just after she’d adopted, as a single woman, her now 24-year-old daughter Maya.

Sidelined: Sports, Culture, and Being a Woman in America (Hardcover)