Virtual: Karen M. McManus with Courtney Summers, You'll Be the Death of Me

Join Porter Square Books for a virtual event with bestselling author and master of suspense Karen M. McManus for the release of her highly-anticipated new YA thriller, You'll Be the Death of Me! Karen will be joined on-screen by Courtney Summers (The Project). This event is free and open to all, hosted on Crowdcast. Signed copies of You'll Be the Death of Me will be available, simply request a signed copy in your order comments! 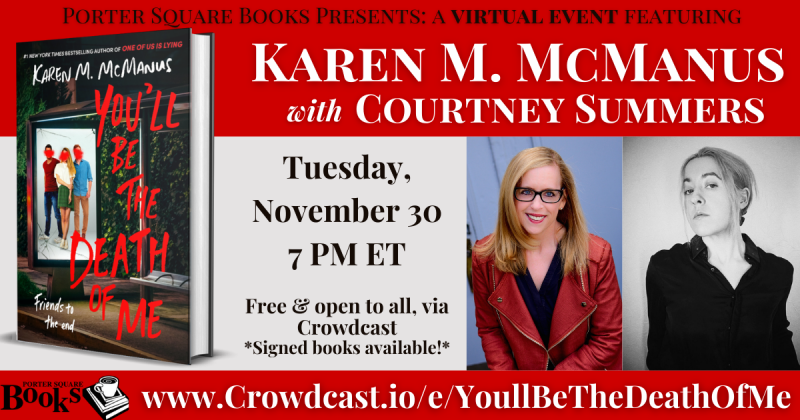 Register for the event on Crowdcast here: https://www.crowdcast.io/e/youllbethedeathofme

From the author of One of Us Is Lying comes a brand-new pulse-pounding thriller. It's Ferris Bueller's Day Off with murder when three old friends relive an epic ditch day, and it goes horribly—and fatally—wrong.

Ivy, Mateo, and Cal used to be close. Now all they have in common is Carlton High and the beginning of a very bad day. Type A Ivy lost a student council election to the class clown, and now she has to face the school, humiliated. Heartthrob Mateo is burned out from working two jobs since his family’s business failed. And outsider Cal just got stood up . . . again.

So when the three unexpectedly run into each other, they decide to avoid their problems by ditching. Just the three of them, like old times. Except they’ve barely left the parking lot before they run out of things to say. . .

. . . until they spot another Carlton High student skipping school—and follow him to the scene of his own murder. In one chance move, their day turns from dull to deadly. And it’s about to get worse. It turns out Ivy, Mateo, and Cal still have some things in common...like a connection to the dead kid. And they’re all hiding something.

Could it be that their chance reconnection wasn’t by chance after all?

Fans of the hit thriller that started it all can watch the secrets of the Bayview Four be revealed in the One of Us is Lying TV series soon to be streaming on NBC's Peacock!

Karen M. McManus earned her BA in English from the College of the Holy Cross and her MA in journalism from Northeastern University. She is the #1 New York Times bestselling author of One of Us Is Lying, Two Can Keep a Secret, One of Us Is Next, The Cousins, and You'll Be the Death of Me. Her work has been published in more than 40 languages. To learn more about Karen and her books, visit karenmcmanus.com, or follow @writerkmc on Twitter and Instagram.

Courtney Summers is the bestselling and critically acclaimed author of several novels for young adults, including Cracked Up to Be, All the Rage and Sadie. Her work has been released to multiple starred reviews, received numerous awards and honors--including the Edgar Award, John Spray Mystery Award, Cybils Award and Odyssey Award--and has been recognized by many library, 'Best Of' and Readers' Choice lists. She lives and writes in Canada.

Register for the event on Crowdcast here: https://www.crowdcast.io/e/youllbethedeathofme

You'll Be the Death of Me (Hardcover)

The Project: A Novel (Hardcover)

One of Us Is Lying (Hardcover)

Two Can Keep a Secret (Paperback)