Virtual: Lauren Sandler with Joanna Rakoff, This Is All I Got

Please join Porter Square Books for a virtual event with Lauren Sandler, author of This Is All I Got: A New Mother's Search For Home, joined in conversation by Joanna Rakoff (My Salinger Year).  From an award-winning journalist, This Is All I Got is a poignant and gripping immersion in the life of a young, homeless single mother amid her quest to find stability and shelter in the richest city in America. This event is free and open to all, hosted on Crowdcast. 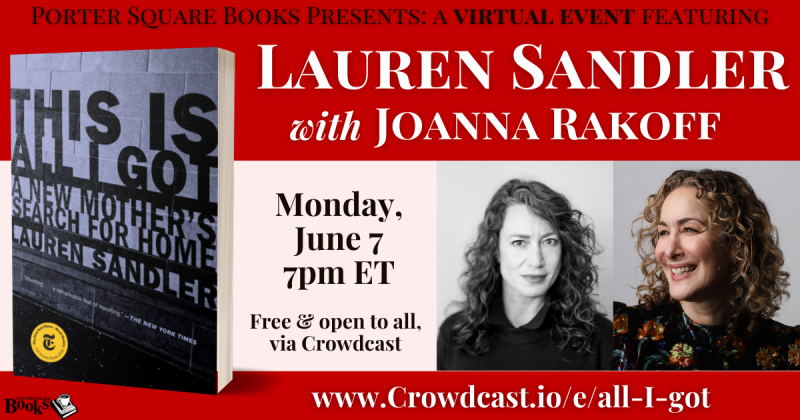 Register for the event on Crowdcast here: https://www.crowdcast.io/e/all-i-got

Camila is twenty-two years old and a new mother. She has no family to rely on, no partner, and no home. Despite her intelligence and determination, the odds are firmly stacked against her. In this extraordinary work of literary reportage, Lauren Sandler chronicles a year in Camila’s life—from the birth of her son to his first birthday—as she navigates the labyrinth of poverty and homelessness in New York City. In her attempts to secure a safe place to raise her son and find a measure of freedom in her life, Camila copes with dashed dreams, failed relationships, the desolation of abandonment, and miles of red tape with grit, humor, and uncanny resilience.

Every day, more than forty-five million Americans attempt to survive below the poverty line. Every night, nearly sixty thousand people sleep in New York City-run shelters, 40 percent of them children. In This Is All I Got, Sandler brings this deeply personal issue to life, vividly depicting one woman's hope and despair and her steadfast determination to change her life despite the myriad setbacks she encounters.

This Is All I Got is a rare feat of reporting and a dramatic story of survival. Sandler’s candid and revealing account also exposes the murky boundaries between a journalist and her subject when it becomes impossible to remain a dispassionate observer. She has written a powerful and unforgettable indictment of a system that is often indifferent to the needs of those it serves, and that sometimes seems designed to fail.

Lauren Sandler is an award-winning journalist. She is the bestselling author of One and Only: The Freedom of Having an Only Child, and the Joy of Being Oneand Righteous: Dispatches from the Evangelical Youth Movement. Her essays and features have appeared in dozens of publications including Time, The New York Times, Slate, The Atlantic, The Nation, The New Republic, The Guardian, and New York. Sandler has led the OpEd Project’s Public Voices Fellowships at Yale, Columbia, and Dartmouth, and has taught in the graduate journalism program at NYU, where she has also been a visiting scholar. She was Poynter Fellow at Yale and a fellow at MacDowell.

Joanna Rakoff is the bestselling author of the memoir My Salinger Year, which has been published around the world and adapted into a feature film starring Sigourney Weaver and Margaret Qualley, and the novel A Fortunate Age, winner of the Elle Readers' Prize and the Goldberg Prize for Fiction. She has written for Vogue, The New York Times, the Guardian, and many other publications.

Register for the event on Crowdcast here: https://www.crowdcast.io/e/all-i-got

This Is All I Got: A New Mother's Search for Home (Paperback)