Virtual: Lily Menon with Casey McQuiston, Make Up Break Up

Porter Square Books is delighted to present a virtual event with Lily Menon for the release of her new novel, Make Up Break Up! Described as "a welcome zing to the romance genre" (Library Journal, starred review), Make Up Break Up is the debut romantic comedy from Lily Menon, who also writes as bestselling YA author Sandhya Menon. Casey McQuiston  (author of store favorite Red, White & Royal Blue and the soon-to-be-released One Last Stop) will join in conversation! This event is free and open to all, hosted on Crowdcast. 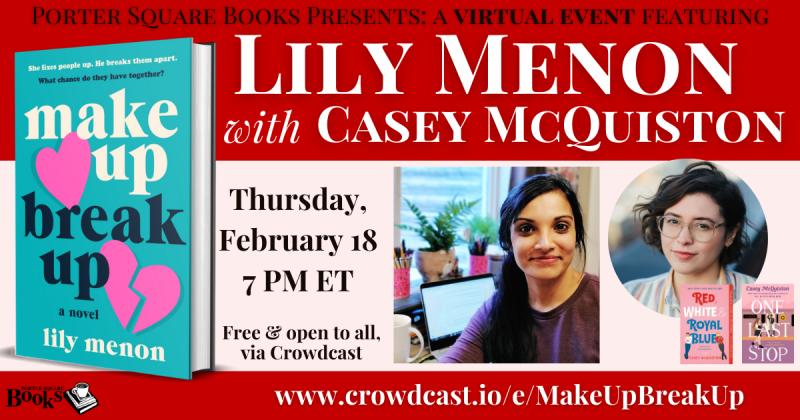 Signed copies of Make Up Break Up are available! Simply request a signed copy in your order comments.

Make Up Break Up is the sparkling and heartfelt romantic comedy debut from Lily Menon.

Love, romance, second chances, fairy-tale endings…these are the things Annika Dev believes in. Her app, Make Up, has been called the “Google Translate for failing relationships.”

Which wouldn’t be a problem if they’d gone their separate ways after that summer fling in Las Vegas, never to see each other again. Unfortunately for Annika, Hudson’s moving not just into her office building, but into the office right next to hers. And he’ll be competing at the prestigious EPIC investment pitch contest: A contest Annika needs to win if she wants to keep Make Up afloat. As if it’s not bad enough seeing his irritatingly perfect face on magazine covers when her own business is failing. As if knowing he stole her idea and twisted it into something vile—and monumentally more successful—didn’t already make her stomach churn.

As the two rival app developers clash again and again—and again—Annika finds herself drawn into Hudson Craft’s fast-paced, high velocity, utterly shallow world. Only, from up close, he doesn’t seem all that shallow. Could it be that everything she thought about Hudson is completely wrong? Could the creator of Break Up teach her what true love’s really about?

Lily Menon has always been enamored of romantic comedies and happily-ever-afters in all shapes and sizes. Her very first love story, written at age nine, was about a handsome young boy who wooed the heroine with books, chocolates, and a very fat puppy. Now Lily lives with her own handsome boy (who indeed wooed her with books, chocolates, and fat puppies) in the mountains of Colorado, where she spends her days dreaming up kissing scenes and meet-cutes. When she's bored, Lily also masquerades as New York Times bestselling YA author Sandhya Menon. Make Up Break Up is her first adult romance.

Casey McQuiston is the New York Times bestselling author of Red, White & Royal Blue and soon to be released One Last Stop, as well as a pie enthusiast. She writes books about smart people with bad manners falling in love. Born and raised in southern Louisiana, she now lives in New York City with her poodle mix and personal assistant, Pepper.

Make Up Break Up: A Novel (Paperback)