Join Porter Square Books for a virtual event with Maggie Doherty for the paperback release of The Equivalents, a finalist for the National Book Critics Circle Award! She will be joined in conversation by Miranda Popkey (Topics of Conversation). This event is free and open to all, hosted on Crowdcast. 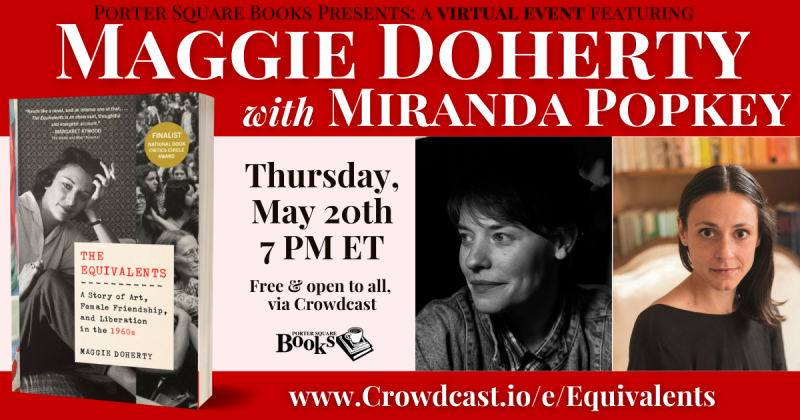 Register to join the event on Crowdcast here: https://www.crowdcast.io/e/equivalents

“Rich and powerful. . . . A love story about art and female friendship.”
—Harper’s Magazine

“Reads like a novel, and an intense one at that. . . . The Equivalents is an observant, thoughtful and energetic account.”
—Margaret Atwood, The Globe and Mail (Toronto)

In 1960, Harvard’s sister college, Radcliffe, announced the founding of an Institute for Independent Study, a “messy experiment” in women’s education that offered paid fellowships to those with a PhD or “the equivalent” in artistic achievement. Five of the women who received fellowships—poets Anne Sexton and Maxine Kumin, painter Barbara Swan, sculptor Marianna Pineda, and writer Tillie Olsen—quickly formed deep bonds with one another that would inspire and sustain their most ambitious work. They called themselves “the Equivalents.” Drawing from notebooks, letters, recordings, journals, poetry, and prose, Maggie Doherty weaves a moving narrative of friendship and ambition, art and activism, love and heartbreak, and shows how the institute spoke to the condition of women on the cusp of liberation.

Maggie Doherty teaches first-year writing at Harvard, where she earned her PhD in English. Her writing has appeared in many publications, including The New Republic, The New York Times, n+1, and The Nation. She lives in Cambridge, MA.

Miranda Popkey lives in Massachusetts. Topics of Conversation is her first novel.

Register to join the event on Crowdcast here: https://www.crowdcast.io/e/equivalents

The Equivalents: A Story of Art, Female Friendship, and Liberation in the 1960s (Paperback)

Topics of Conversation: A novel (Paperback)