Join Porter Square Books for a virtual event with acclaimed author Malinda Lo to celebrate the release of her new novel, Last Night at the Telegraph Club. Malinda will be joined in conversation by New York Times bestselling author Emily X.R. Pan. This event is free and open to all, and hosted on Crowdcast. 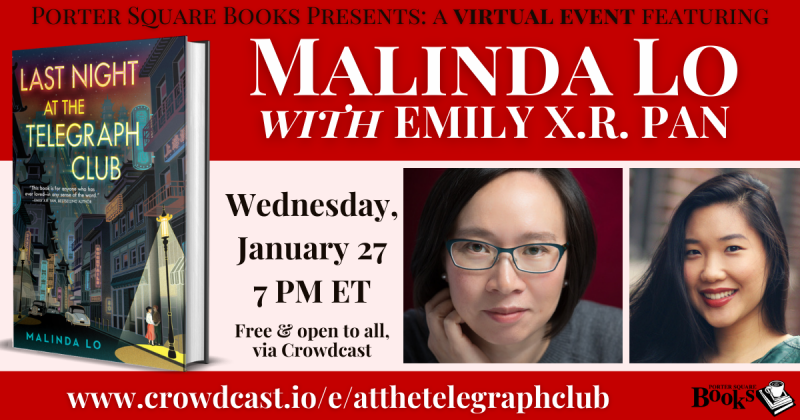 Register for the event on Crowdcast here: https://www.crowdcast.io/e/atthetelegraphclub

*Signed and personalized books are available! Purchase your signed edition of Last Night at the Telegraph Club below, and let us know in your order comments who you'd like the book signed too. Please allow a little coordination additional time for personalized book orders - it'll be worth it!*

Acclaimed author of Ash Malinda Lo returns with her most personal and ambitious novel yet, a gripping story of love and duty set in San Francisco's Chinatown during the 1950s.

"That book. It was about two women, and they fell in love with each other." And then Lily asked the question that had taken root in her, that was even now unfurling its leaves and demanding to be shown the sun: "Have you ever heard of such a thing?"

Seventeen-year-old Lily Hu can't remember exactly when the question took root, but the answer was in full bloom the moment she and Kathleen Miller walked under the flashing neon sign of a lesbian bar called the Telegraph Club.

America in 1954 is not a safe place for two girls to fall in love, especially not in Chinatown. Red-Scare paranoia threatens everyone, including Chinese Americans like Lily. With deportation looming over her father--despite his hard-won citizenship--Lily and Kath risk everything to let their love see the light of day.

Malinda Lo is the critically acclaimed author of several young adult novels, including most recently A Line in the Dark, which was a Kirkus Best YA Book of 2017 and one of Vulture's 10 Best YA Books of 2017. Her novel Ash, a lesbian retelling of Cinderella, was a finalist for the William C. Morris YA Debut Award, the Andre Norton Award for YA Science Fiction and Fantasy, the Mythopoeic Fantasy Award, and was a Kirkus Best Book for Children and Teens. She has been a three-time finalist for the Lambda Literary Award. Malinda's nonfiction has been published by the New York Times Book Review, NPR, the Huffington Post, The Toast, the Horn Book, and the anthologies Here We Are, How I Resist, and Scratch. She lives in Massachusetts with her wife.

Emily X.R. Pan is the New York Times bestselling author of The Astonishing Color of After, which won the APALA Honor Award and the Walter Honor Award, received six starred reviews, was an L.A. Times Book Prize finalist, and was longlisted for the Carnegie Medal, among other accolades. NBC News called the novel “moving and poetic” and the Wall Street Journal named it as one of the top twelve books of the season. Emily is also co-creator of the FORESHADOW anthology. She currently lives on Lenape land in Brooklyn, New York, but was originally born in the Midwestern United States to immigrant parents from Taiwan. Visit Emily online at exrpan.com, and find her on Twitter and Instagram: @exrpan.

Register for the event on Crowdcast here: https://www.crowdcast.io/e/atthetelegraphclub