Join Porter Square Books for a virtual event featuring two brilliant writers discussing their latest novels, Meredith Hall (Beneficence) and Simon Van Booy (Night Came with Many Stars)! This event is virtual, free and open to all, hosted on Crowdcast. 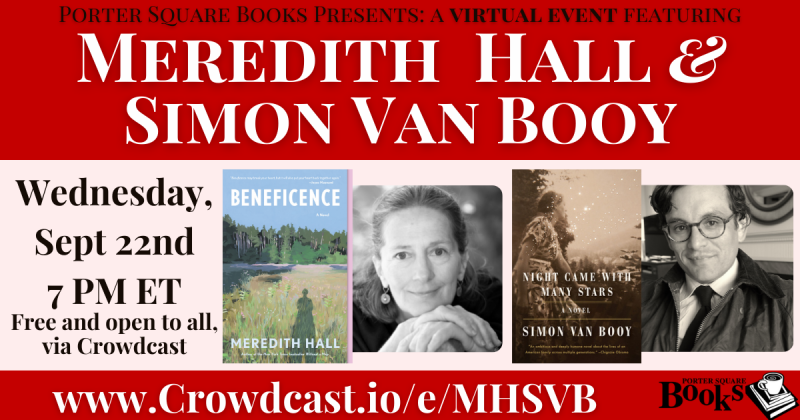 Register to join the event on Crowdcast here: https://www.crowdcast.io/e/mhsvb

After a sudden and terrible loss, how does a loving family find their way back to the goodness and peace they once shared? Reviewers and readers have called Hall's latest literary historical novel Beneficence "hauntingly beautiful," "a masterpiece of compassion," "a page-turner and an artistic triumph." Written by a masterful storyteller, this is a book that illuminates the journey we make through grief to healing. In the midst of a nearly perfect life, Doris Senter is thankful but wary. "We can't ever know what will come," she says. When an unimaginable tragedy turns the family of five into a family of four, everything the Senters held faith in is shattered. The family is consumed by sorrow and guilt. Slowly, the surviving family members find their way to forgiveness--of themselves and of each other. Few writers know the human heart and the burden of grief as New York Times bestselling author Meredith Hall (Without a Map). This is a radiant novel of goodness and love--both its gifts and its obligations--that will stay with readers long after the last page. With a rare tenderness and compassion, Beneficence shows broken hearts becoming whole as this family reclaims their love and peace.

Award-winning author Simon Van Booy's spellbinding novel Night Came with Many Stars spans decades as he tells the story of Carol and the people in her life. In Kentucky, back in 1933, Carol's daddy lost his 13-year-old daughter in a game of cards. Incidents intersect and lives unexpectedly change course in this masterfully interwoven story of chance and choice that leads home again to a night blessed with light."What you give in this world," an old man tells his grandson, "will be given back to you." Those words illuminate the actions within this unforgettable novel and its connected characters. A young man survives two nearly fatal accidents. A Black family saves an orphaned white boy. A pregnant teenager is rescued by the side of the road. A teenager with developmental disabilities is given his first job. Each incident grows in meaning and power over many decades as we see connections sometimes felt but not always apparent to the people themselves. Told by a master storyteller, Night Came with Many Stars is a rare novel that reveals how wondrous, mysterious, and magically connected life can be--the light Simon Van Booy creates illuminates our own lives.

Meredith Hall’s memoir Without a Map is a classic of the genre and a New York Times bestseller. It was named Best Book of the Year by Kirkus and BookSense, as well as Elle’s “Readers’ Pick of the Year.” Her work has appeared in Five Points, The Gettysburg Review, The Kenyon Review, The Southern Review, The New York Times, and many others. Hall divides her time between Maine and California.

Simon Van Booy is the author of four highly acclaimed collections of short stories and four novels—including, The Illusion of Separateness, a national bestseller—and several books for children. He is the editor of three philosophy books, and has written for The New York Times, The Financial Times, The Guardian, The Times, National Public Radio, and the BBC. His books have been translated into many languages.

Register to join the event on Crowdcast here: https://www.crowdcast.io/e/mhsvb

Night Came with Many Stars (Hardcover)