Virtual: Miel Moreland with Erin Hahn, It Goes Like This

Join Porter Square Books for the virtual launch of local author Miel Moreland's debut young adult novel, It Goes Like This!  Erin Hahn (More Than Maybe) will join in conversation. This event is free and open to all, hosted virtually on Crowdcast. *Miel is happy to sign copies of It Goes Like This - simply request a signed copy in your order comments!* 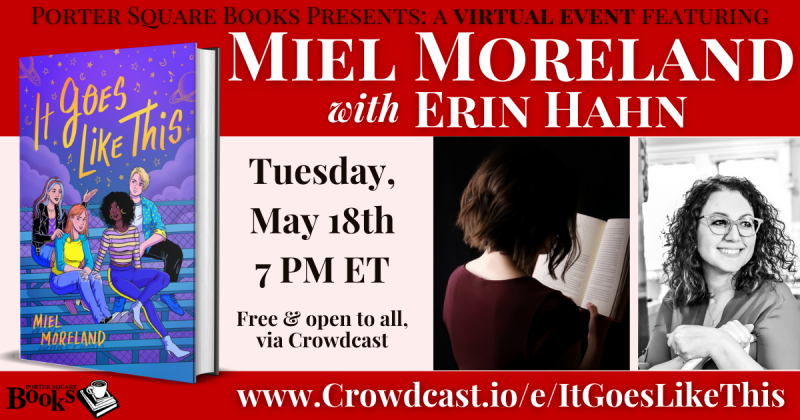 In Miel Moreland's heartfelt young adult debut, It Goes Like This, four queer teens realize that sometimes you have to risk hitting repeat on heartbreak.

Eva, Celeste, Gina, and Steph used to think their friendship was unbreakable. After all, they've been though a lot together, including the astronomical rise of Moonlight Overthrow, the world-famous queer pop band they formed in middle school, never expecting to headline anything bigger than the county fair.

But after a sudden falling out leads to the dissolution of the teens' band, their friendship, and Eva and Celeste's starry-eyed romance, nothing is the same. Gina and Celeste step further into the spotlight, Steph disappears completely, and Eva, heartbroken, takes refuge as a songwriter and secret online fangirl...of her own band. That is, until a storm devastates their hometown, bringing the four ex-best-friends back together. As they prepare for one last show, they'll discover whether growing up always means growing apart.

Miel Moreland was born and raised in Minneapolis, Minnesota. With time spent in California and France, she has a Midwestern heart but wandering feet. When not making pop music references and celebrating fandom, she is likely to be found drinking hot chocolate and making spreadsheets. She currently resides in Boston. It Goes Like This is her debut novel.

Erin Hahn is the author of You'd Be Mine, More Than Maybe, and Never Saw You Coming. She married her very own YA love interest, who she met on her first day of college, and has two kids who are much, much cooler than she ever was at their age. She lives in Ann Arbor, Michigan, a.k.a. the greenest place on earth, and has a cat named Gus who plays fetch and a dog named June who doesn’t.

*Request a signed copy in your order comments! Available for pick up or shipping nationwide.*