Porter Square Books is delighted to present N. Griffin in conversation with A.S. King! This event is free and open to all, hosted virtually via Crowdcast on Wednesday, March 30 at 7pm. 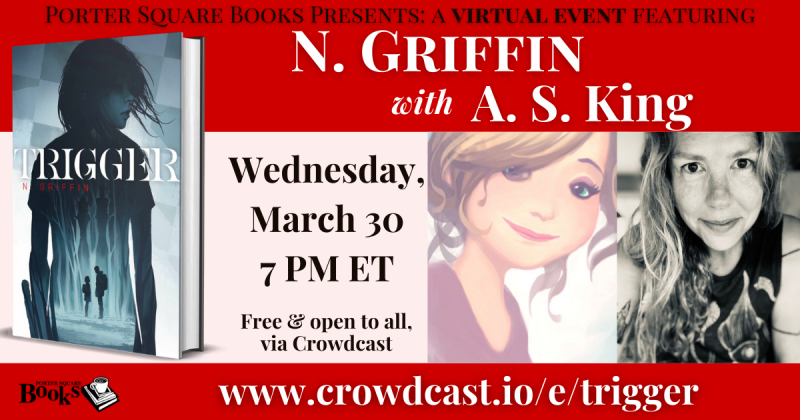 Register for the Crowdcast here: https://www.crowdcast.io/e/trigger

The Queen’s Gambit meets The Hunger Games in this harrowing young adult thriller about a teen girl whose abusive father teaches her the finer points of chess and hunting for his own sinister ends.

Didi tries her best to be a good girl, but it’s hard to keep track of her father’s rules. When she wins a chess tournament, he’s angry she didn’t win with a better move and makes her run laps around the house. When she runs laps the next day, she has to keep running until she’s faster than the day before. When she’s skilled enough to outshoot him with both a gun and bow and arrow, he grows furious when she won’t then shoot a baby rabbit who crosses their path. And Didi can’t do anything to escape being threatened with the Hurt Stick when she misbehaves.

He’s all she has, he reminds her. They have to be prepared. They have to be prepared to fight the rest of the world, when the world comes to an end. He’s grooming her, to keep her safe. He loves Didi. He does—he says so! And so Didi runs harder; annihilates her opponents in chess; takes down a deer at a dead run. He’s grooming her, after all, to be the best…he says so.

N. Griffin is the author of  The Whole Stupid Way We Are , for which she was named one of  Publishers Weekly ’s Flying Start Authors of 2013, as well as  Just Wreck It All ,  Smashie McPerter   and The Mystery of Room 11 ,  Smashie McPerter and the Mystery of the Missing Goop , and  Trigger . She received her MFA from the Vermont College of Fine Arts.

A.S. King has been called “One of the best Y.A. writers working today” by the  New York Times Book Review.  King is the author of YA and middle grade novels including the 2020 Michael L. Printz Award-winning  Dig,  2013 Los Angeles Times   Book Prize winner  Ask the Passengers,  2011 Printz Honor Book  Please Ignore Vera Dietz  and she is the 2022 recipient of the Margaret A. Edwards Award for a lasting contribution to teen literature . She is an MFA faculty member at Vermont College of Fine Arts and spends many months of the year traveling the country speaking to high school students about trauma, emotions, and red velvet cake. Find more at  www.as-king.com .