Porter Square Books is pleased to bring you an opportunity to chat with Neil himself virtually, hosted in partnership with William Morrow, to celebrate the release of The Neil Gaiman Reader! Join us on Monday, 10/26 at 4pm ET to watch a prerecorded talk with Neil Gaiman and Marlon James.  Neil will join the event to answer attendee questions in a live chat following the discussion broadcast. This event is ticketed, and your ticket comes with a copy of the book, which can be shipped or picked up. This event is hosted on On24 by HarperCollins, and an event code will be emailed to attendees on the day of the event. 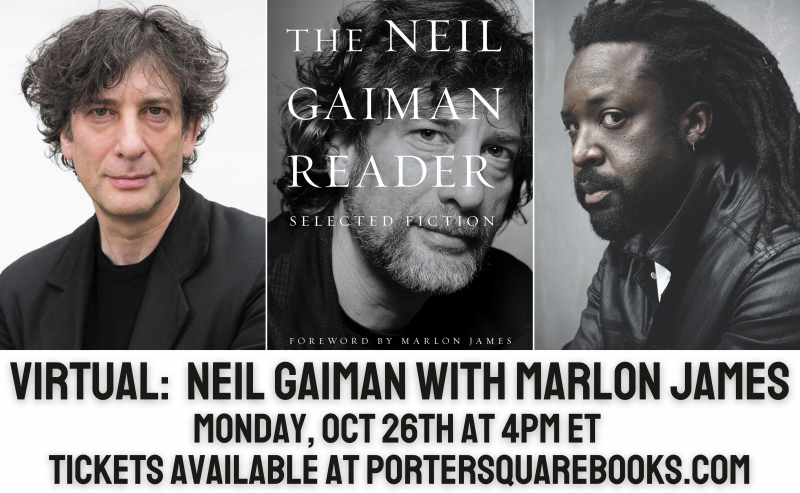 An outstanding array—52 pieces in all—of selected fiction from the multiple-award-winning, #1 New York Times bestselling author Neil Gaiman, curated by his readers around the world, and introduced with a foreword by Booker Prize-winning author Marlon James.

Spanning Gaiman’s career to date, The Neil Gaiman Reader: Selected Fiction is a captivating collection from one of the world’s most beloved writers, chosen by those who know his work best: his devoted readers.

A brilliant representation of Gaiman's groundbreaking, entrancing, endlessly imaginative fiction, this captivating volume includes excerpts from each of his five novels for adults —Neverwhere, Stardust, American Gods, Anansi Boys, and The Ocean at the End of the Lane—and nearly fifty of his short stories.

Impressive in its depth and range, The Neil Gaiman Reader: Selected Fiction is both an entryway to Gaiman’s oeuvre and a literary trove Gaiman fans old and new will return to many times over.

Neil Gaiman is a #1 New York Times bestselling author of books for children and adults whose award-winning titles include Norse Mythology, American Gods, The Graveyard Book, Good Omens (with Terry Pratchett), Coraline, and The Sandman graphic novels. Neil Gaiman is a Goodwill Ambassador for UNHCR and Professor in the Arts at Bard College.

Marlon James was born in Jamaica in 1970. His most recent novel, Black Leopard, Red Wolf, the first novel in James's Dark Star trilogy, was a finalist for the 2019 National Book Award. His previous novel, A Brief History of Seven Killings, was the winner of the 2015 Man Booker Prize, The American Book Award, and The Anisfield-Wolf Book Prize for fiction. He is also the author of the novels John Crow's Devil and The Book of Night Women, which won the Dayton Literary Peace Prize.

By purchasing this ticket and submitting your email address, you understand that you will receive email communications from HarperCollins Publishers, (195 Broadway, New York, NY 10007 USA) providing information about products and services of HarperCollins and its affiliates. You may unsubscribe from these email communications at any time. If you have any questions, please review our Privacy Policy or email us at privacypolicy@harpercollins.com.