Join Porter Square Books for a virtual talk with Noah Hurowitz, author of El Chapo: The Untold Story of the World's Most Infamous Drug Lord - a stunning investigation of the life and legend of Mexican kingpin Joaquín Archivaldo “El Chapo” Guzmán Loera, building on Hurowitz's revelatory coverage for Rolling Stone of El Chapo’s federal drug-trafficking trial. He will be joined in conversation by acclaimed journalist J. Jesús Esquivel. This event is free and open to all, hosted on Crowdcast. 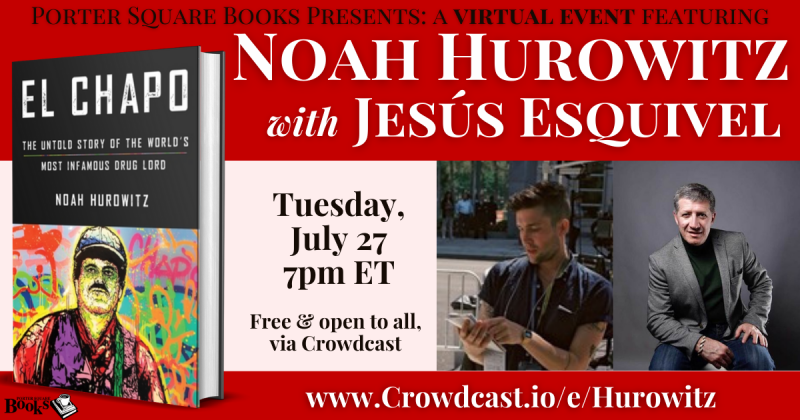 Register to join this event on Crowdcast here: https://www.crowdcast.io/e/hurowitz

This is the true story of how El Chapo built the world’s wealthiest and most powerful drug-trafficking operation, based on months’ worth of trial testimony and dozens of interviews with cartel gunmen, Mexican journalists and political figures, Chapo’s family members, and the DEA agents who brought him down.

Over the course of three decades, El Chapo was responsible for smuggling hundreds of tons of cocaine, marijuana, heroin, meth, and fentanyl around the world, becoming in the process the most celebrated and reviled drug lord since Pablo Escobar. El Chapo waged ruthless wars against his rivals and former allies, plunging vast areas of Mexico into unprecedented levels of violence, even as many in his home state of Sinaloa continued to view him as a hero.

This unputdownable book, written by a great new talent, brings El Chapo’s exploits into a focus that previous profiles have failed to capture. Hurowitz digs in deep beyond the legends and delves into El Chapo’s life and legacy—not just the hunt for him, revealing some of the most dramatic and often horrifying moments of his notorious career, including the infamous prison escapes, brutal murders, multi-million-dollar government payoffs, and the paranoia and narcissism that led to his downfall. From the evolution of organized crime in Mexico to the militarization of the drug war to the devastation wrought on both sides of the border by the introduction of synthetic opioids like fentanyl, this book is a gripping and comprehensive work of investigative, on-the-ground reporting.

Noah Hurowitz is a journalist based in New York City. He covered the trial of El Chapo for Rolling Stone, and his work has also appeared in The Village Voice, The Baffler, New York magazine, and many more. El Chapo is his first book.

Register to join this event on Crowdcast here: https://www.crowdcast.io/e/hurowitz

El Chapo: The Untold Story of the World's Most Infamous Drug Lord (Hardcover)