Virtual: Polly Barton, Where The Wild Ladies Are (An Independent Bookstore Day Special!)

Join Porter Square Books for a Independent Bookstore Day special - a virtual talk with Polly Barton, translator of Porter Square Books' Staff Pick of 2021, Where The Wild Ladies Are by Aoko Matsuda! Polly Barton will be joined in conversation by PSB's own Marika McCoola, who nominated the book for our yearly honor, describing her pick as "Enthralling, smart, and relatable...and featur[ing] ghosts." This virtual event is free and open to everyone, taking place at noon ET on April 24th via Crowdcast. Copies of Where The Wild Ladies Are are available for 20% off all year! 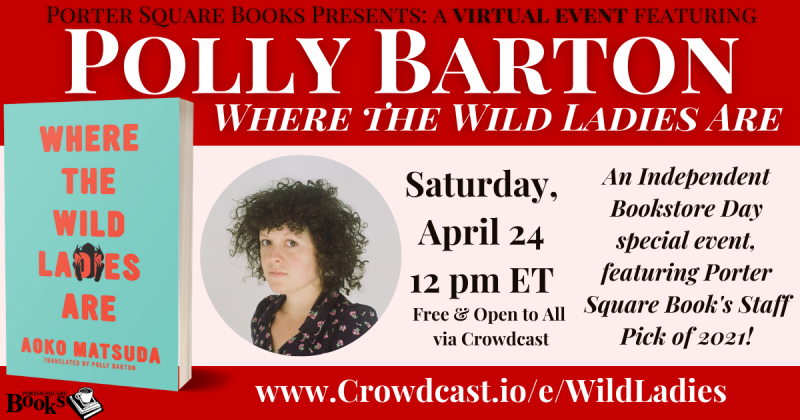 Register to join the event on Crowdcast here: https://www.crowdcast.io/e/wildladies

In this delightfully uncanny collection of feminist retellings of traditional Japanese folktales (The New York Times Book Review), humans live side by side with spirits who provide a variety of useful services--from truth-telling to babysitting, from protecting castles to fighting crime.

A busybody aunt who disapproves of hair removal; a pair of door-to-door saleswomen hawking portable lanterns; a cheerful lover who visits every night to take a luxurious bath; a silent house-caller who babysits and cleans while a single mother is out working. Where the Wild Ladies Are is populated by these and many other spirited women--who also happen to be ghosts. This is a realm in which jealousy, stubbornness, and other excessive "feminine" passions are not to be feared or suppressed, but rather cultivated; and, chances are, a man named Mr. Tei will notice your talents and recruit you, dead or alive (preferably dead), to join his mysterious company.

With Where the Wild Ladies Are, Aoko Matsuda takes the rich, millenia-old tradition of Japanese folktales--shapeshifting wives and foxes, magical trees and wells--and wholly reinvents them, presenting a world in which humans are consoled, guided, challenged, and transformed by the only sometimes visible forces that surround them.

Aoko Matsuda is a writer and translator. In 2013, her debut book, Stackable, was nominated for the Yukio Mishima Prize and the Noma Literary New Face Prize. Her novella The Girl Who Is Getting Married was published by Strangers Press in the UK in 2016. In 2019, her short story "The Woman Dies" was shortlisted for a Shirley Jackson Award. She has translated work by Karen Russell, Amelia Gray, and Carmen Maria Machado into Japanese.

Polly Barton is a translator of Japanese literature and nonfiction, currently based in Bristol, UK. Her book-length translations include Friendship for Grown-Ups by Nao-cola Yamazaki, Mikumari by Misumi Kubo and Spring Garden by Tomoka Shibasaki. She has translated short stories for Words Without Borders, The White Review, and Granta. After being awarded the 2019 Fitzcarraldo Editions Essay Prize, she is currently working on a nonfiction book entitled Fifty Sounds.

Marika McCoola is an illustrator, educator, and the New York Times bestselling author of Baba Yaga's Assistant. In addition to writing and illustrating, Marika is one of the owners of Porter Square Books, where she runs school book fairs. Where The Wild Ladies Are was her (winning!) nomination for Porter Square Books Staff Pick of the Year.

Register to join the event on Crowdcast here: https://www.crowdcast.io/e/wildladies

Where the Wild Ladies Are (Paperback)