Join our friends Raúl the Third and Karl Stevens for a joint virtual event celebrating their newest releases, picture books Tag Team and Training Day with El Toro and Friends from Raul and graphic novel Penny from Karl! This afternoon event is free and open to all via Crowdcast. 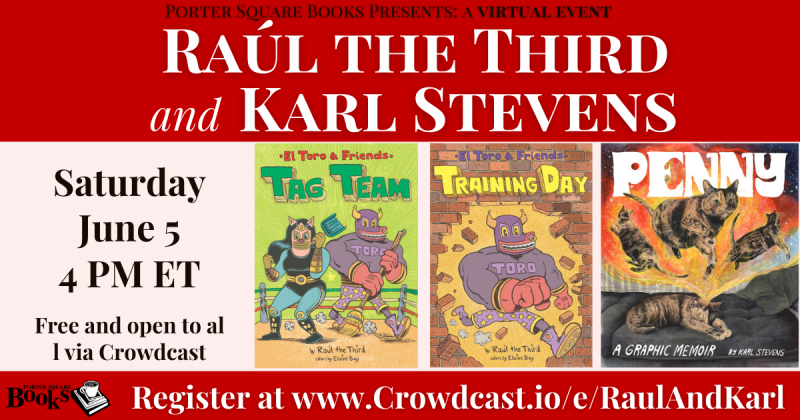 Register for the event on Crowdcast here: https://www.crowdcast.io/e/raulandkarl

In Tag Team, luchadores El Toro and La Oink Oink are the perfect tag team as they clean up together in this playful and visually stunning early reader! Perfect for fans of Elephant and Piggie, comic book fans, and kids looking to practice both Spanish and English. After last night’s match, the stadium is a mess! There is so much work to be done and Mexican wrestling star El Toro feels overwhelmed. Enter . . . La Oink Oink! With the collaborative spirit they have in the ring, El Toro and La Oink Oink tackle the cleaning up together. La Oink Oink sweeps and El Toro picks up the trash.  La Oink Oink washes the dishes, and El Toro dries them.  Together, an insurmountable mountain of chores becomes a series of fun tasks for these two wrestling friends!

Prepare all in love with Raúl the Third’s Training Day as Kooky Dooky helps luchador El Toro train for his next wrestling match!  Today, El Toro is feeling uninspired. But his coach, Kooky Dooky, knows that practice makes better and it’s important for El Toro to stay in shape and keep training! These eye-popping illustrations will appeal to comic book fans and encourage visual literacy, with an easy-to-follow mix of Spanish and English vocabulary words. Readers will cheer as El Toro’s spirits are lifted with a little help from his community and he trains hard to win his next big wrestling match against The Wall!

Karl Steven's Penny features the philosophical and existential musings of the eponymous cat. Told through a collection of stories, Penny: A Graphic Memoir wanders through her colorful imagination as she recalls her humble beginnings on the streets of New York and waxes poetic about the realities of her sheltered life living in an apartment with her owners. Filled with ennui, angst, and vivid dreams, Penny proves that being a cat is more profound than we once thought. A unique blend of high art and humor, Penny: A Graphic Memoir perfectly portrays one cat's struggles between her animal instincts, her philosophical reflections, and the lush creature comforts of a life with human servants.

Raúl the Third is the Pura Belpré Honor-winning illustrator of ¡Vamos! Let's Go to the Market and ¡Vamos! Let's Go Eat. He is currently working on the expanded world of his ¡Vamos! series. He grew up in El Paso, Texas and Ciudad Juárez, México, and now lives in Boston, Massachusetts with colorist and collaborator Elaine Bay and their son, Raúl the Fourth. Find him online at raulthethird.com, on Twitter @raulthe3rd, and on Instagram @raulthethird.info.
Twitter: @raulthe3rd
Instagram: @raulthethird.info

Karl Stevens is a graphic novelist and painter whose comics have appeared regularly in the New Yorker, Village Voice (where this series premiered), and Boston Phoenix. Stevens' graphic novels include Whatever (2008), The Lodger (2010), Failure (2013), and The Winner (2018). He lives in Boston with his wife and their overlords cats, Penny and Pepper.

Register for the event on Crowdcast here: https://www.crowdcast.io/e/raulandkarl