Join Porter Square Books for the virtual launch of staff-favorite Rebecca Kim Wells' Briar Girls! This top-PSB pick is the highly anticipated standalone novel from the author of our Staff-Pick-Of-The-Year winning Shatter the Sky duology, an epic retelling of a classic fairytale with an unforgettable heroine at its center. Rebecca will be joined on screen by Kate Elliott (Unconquerable Sun)! This event is free and open to all, hosted virtually via Crowdcast. Signed copies of Briar Girls are available! 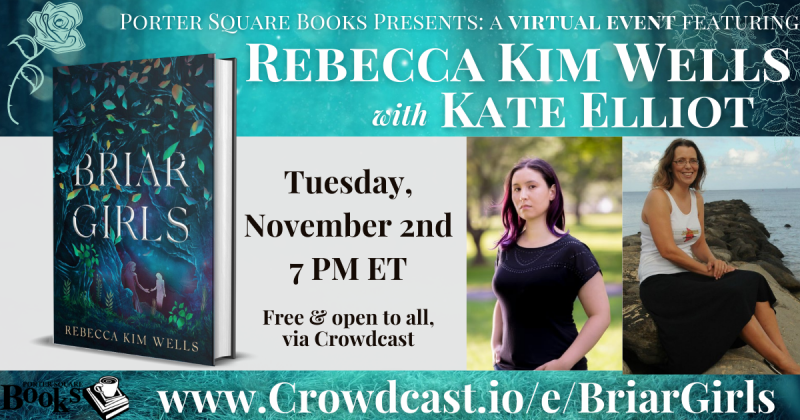 Register to join the event on Crowdcast here: https://www.crowdcast.io/e/briargirls

The Cruel Prince meets A Curse So Dark and Lonely in this epic reimagining of “The Sleeping Beauty” that follows a teen girl on a quest to wake a sleeping princess in an enchanted forest, while searching for the truth behind her own deadly curse.

Lena has a secret: the touch of her skin can kill. Cursed by a witch before she was born, Lena has always lived in fear and isolation. But after a devastating mistake, she and her father are forced to flee to a village near the Silence, a mysterious forest with a reputation for luring people into the trees, never to be seen again…​

Until the night an enigmatic girl stumbles out of the Silence and into Lena’s sheltered world. Miranda comes from the Gather, a city in the forest brimming with magic. She is on a quest to wake a sleeping princess believed to hold the key to liberating the Gather from its tyrannical ruler—and she offers Lena a bargain. If Lena assists her on her journey, Miranda will help her break the curse.

Mesmerized by Miranda and her promise of a new life, Lena jumps at the chance. But the deeper into the Silence she goes, the more she suspects she’s been lied to—about her family’s history, her curse, and her future. As the shadows close in, Lena must choose who to trust and decide whether it’s more important to have freedom…or power.

Rebecca Kim Wells grew up in California before moving east in search of crisp autumns and snowy winters. She is the author of the Shatter the Sky duology and Briar Girls. Her debut novel, Shatter the Sky, was a New England Book Award Finalist, a Bisexual Book Award winner, a Rainbow List selection, an Indies Introduce selection, and a Kids’ Indie Next Pick. When not writing, she works at a fiercely independent bookstore in Massachusetts and spends too much time singing along to musicals. Learn more at RebeccaWellsWrites.com.

Kate Elliott has been writing science fiction and fantasy for 30 years, with 27 books in print. Her most recent novel is Unconquerable Sun, gender swapped Alexander the Great in space. She is best known for her Crown of Stars epic fantasy series, the Afro-Celtic post-Roman alt-history fantasy (with lawyer dinosaurs) Cold Magic, and YA fantasy Court of Fives. Her particular focus is immersive world building in epic stories of adventure & transformative cultural change. She lives in Hawaii, where she paddles outrigger canoes & spoils her schnauzer. You can find her online at kateelliott.substack.com and @KateElliottSFF on Twitter.

Register to join the event on Crowdcast here: https://www.crowdcast.io/e/briargirls