Please join Porter Square Books to celebrate the release of Storm the Earth, the highly anticipated sequel to Shatter the Sky -- Porter Square Books' Staff Pick of the Year -- with PSB's very own Rebecca Kim Wells, joined in conversation with Tessa Gratton! This event takes place on Crowdcast and is free and open to all. 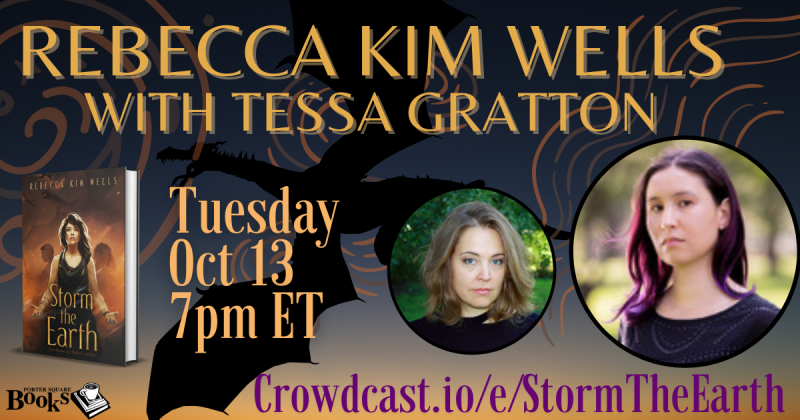 Register to join the event on Crowdcast here: https://www.crowdcast.io/e/stormtheearth

Maren and her girlfriend Kaia set out to rescue Sev and free the dragons from the corrupt emperor in the explosive finale to the journey that began with the thrilling Shatter the Sky.

Let them burn. Maren’s world was shattered when her girlfriend, Kaia, was abducted by the Aurati. After a daring rescue, they’ve finally been reunited, but Maren's life is still in pieces: Kaia seems more like a stranger than the lover Maren knew back home; Naava, the mother of all dragons, has retreated into seclusion to recover from her wounds, leaving Maren at a loss on how to set the rest of the dragons free; and worst of all, her friend Sev has been captured by the emperor’s Talons.

As a prisoner of Zefed, Sev finds himself entangled in a treacherous game of court politics. With more people joining the rebellion, whispers of a rogue dragon mistress spreading, and escape seeming less likely with each passing day, Sev knows that it won’t be long before the emperor decides to make an example of him. If he’s to survive, he’ll have to strike first—or hope Maren reaches him in time.

With the final battle for Zefed looming, Maren must set aside her fears, draw upon all she’s learned about her dragon-touched abilities, and face her destiny once and for all. But when the fighting is over and the smoke clears, who will be left standing?

Rebecca Kim Wells grew up in California before moving east in search of crisp autumns and snowy winters. Her debut novel, Shatter the Sky, was a New England Book Award Finalist, an Indies Introduce selection, and a Kids’ Indie Next Pick. When not writing, she works at a fiercely independent bookstore in Massachusetts and spends too much time singing along to musicals. Learn more at RebeccaWellsWrites.com.

Tessa Gratton is the author The Queens of Innis Lear and Lady Hotspur, as well as several YA series and short stories which have been translated into twenty-two languages. Her most recent YA novels are Strange Grace and Night Shine. Though she has lived all over the world, she currently lives alongside the Kansas prairie with her wife. She is the associate director of Madcap Retreats and worked as the lead writer for Serial Box Publishing’s project Tremontaine. Visit her at TessaGratton.com.

Register to join the event on Crowdcast here: https://www.crowdcast.io/e/stormtheearth

Storm the Earth (The Shatter the Sky Duology) (Hardcover)