Join Porter Square Books for a panel talk with the contributors to the new anthology, Recognize Fascism: A Science Fiction and Fantasy Anthology, edited by Crystal Huff. This event is free and open to all, hosted on Crowdcast. 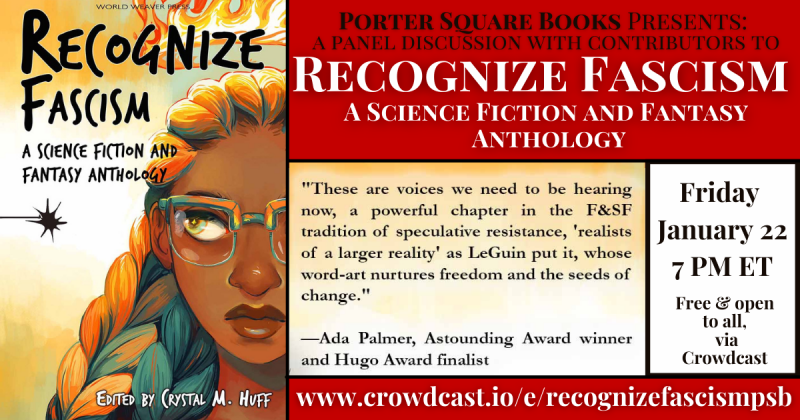 Register for the event on Crowdcast here: https://www.crowdcast.io/e/recognizefascismpsb

January 22nd will be two days after Joseph Biden's inauguration (hoping, goodness, that it goes off without a hitch). The Trump era of American politics has inspired many responses in the arts, and one of them is the new book Recognize Fascism: A Science Fiction and Fantasy Anthology. Boston local Crystal Huff, the editor of Recognize Fascism, will touch base with many of the authors in this short story collection, coming together from around the world. We'll converse about recent events, but also about imagined possibilities within the worlds of Recognize Fascism.

There will be time for questions at the end.

Across many worlds and many timelines, these stories depict the moments when people see the fascism in front of them for what it is, accept it as real, and make the choice to fight it. Who are the canaries in the coal mine? When can the long-hidden voice no longer be ignored? Anti-fascist rebellion can take many forms. A transgender woman living on an artificial satellite learns to reject oppression via poetry. A machine ethicist finds a way to dance with her gods in a surveillance state. An unlikely golem hears a new call to action. A jailed musician rediscovers the music of rebellion.

Will you recognize fascism and join the revolution?

Register for the event on Crowdcast here: https://www.crowdcast.io/e/recognizefascismpsb

Crystal M. Huff (they/them) is the editor of this book, the Executive Director of Include Better, and co-chair of International Pronouns Day. Crystal also co-edited Resist Fascism (2018), and edits freelance for the Future Affairs Administration in Beijing. They have been an invited speaker in Sweden, Finland, China, Iceland, Israel, Canada, the UK, Aruba, Spain, and across the USA. Over 2,000 people worldwide have taken Crystal’s Impostor Syndrome workshops. Crystal chaired or co-chaired seven SFF conventions between 2011-2017.

Brandon O'Brien is a performance poet, speculative fiction writer, teaching artist and game designer from Trinidad and Tobago. His work has been published in Uncanny Magazine, Strange Horizons, and New Worlds, Old Ways: Speculative Tales from the Caribbean, among other outlets. He is also the Poetry editor of FIYAH.

Octavia Cade is a New Zealand writer. Her stories have appeared in Clarkesworld, Asimov's, Shimmer, and a number of other places. A climate fiction novel, The Stone Wētā, was recently released by a NZ publisher. She attended Clarion West 2016, and is the 2020 writer-in-residence at Massey University.

Rodrigo Juri is a retired high school biology teacher from Chile. His works have been published in portals, magazines, and anthologies from Chile, Argentina, Spain, France, and in Clarkesworld. Rocket Stank Rank once criticized his translation of his own story. Rodrigo lives with his wife and cat near Valparaiso, Chile.

Laura Jane Swanson holds a degree in biochemistry and has done graduate work in molecular biology and science education.  She lives in Indiana with her family, where she dreams of the coast and knits lots of socks.

Lucie Lukačovičová was born in Prague, and lived for a while in Cuba, Angola, England, Germany and India. She has a Master degree in librarianship and cultural anthropology at Charles University, and has published over 100 short stories and 5 novels in Czech, shorter texts in Chinese, Romanian, German and English. She collects legends and ghost stories. Find more at lucie.lukacovicova.cz/ and www.facebook.com/lucie.lukacovicova.author/

Kiya Nicoll is only an egg, and does not communicate entirely in echolalia (but it is sometimes a near thing). They write stories and mythologies in the stolen moments between being covered in cats and children and very occasionally reptiles.

Alexei Collier grew up in Southern California, but now lives across the street from Chicago with his wife and their cat. His short fiction has appeared in Flash Fiction Online and Cicada, among others. You can find out more about Alexei at his oft-neglected website, alexeicollier.com.

Hal Y. Zhang writes science, fiction, and science fiction, in no particular order. Her work is at halyzhang.com, and her chapbook Hard Mother, Spider Mother, Soft Mother was published by Radix Media.

Luna Corbden (who also writes as Luna Lindsey) lives in Washington State. They are autistic and genderfluid. Their stories have appeared in the Journal of Unlikely Entomology, Zooscapes, and Crossed Genres. They tweet like a bird @corbden. Their novel, Emerald City Dreamer, is about faeries in Seattle and the women who hunt them.

Meridel Newton lives in Washington, DC. Her work has previously appeared in the 1001 Knights anthology and various self-published releases. Her writing reflects her interests in environmental science, social justice, folklore, and human geography. She can be found at www.thepuppetkingdom.com and on Twitter as @ridelee.

Leonardo Espinoza Benavides is a Chilean physician and science fiction writer, currently serving as a director of Chile’s SF Society (ALCIFF). His works include Más espacio del que soñamos (2018) and Adiós, Loxonauta (2020). Leo edited and contributed to COVID-19-CFCh: Antología sci fi en tiempos de pandemia (2020). When not at the hospital, he can be found quarantined in Santiago with his wife, Daniele, and their dog, Hulky. Website: www.LeoEspinoza.cl / Facebook & Instagram: @leonardoespinozabenavides

Phoebe Barton is a queer trans science fiction writer. Her short fiction has appeared in venues such as Analog, On Spec, and Kaleidotrope. She is an Associate Editor at Escape Pod, is a graduate of the Clarion West Writers Workshop, and lives with a robot in the sky above Toronto.