Join us for the virtual launch of Regina Hansen's debut YA novel, The Coming Storm! She will be joined in conversation by Theodora Goss. This event is free and open to all, hosted on Crowdcast. Signed copies of the book are available for purchase! 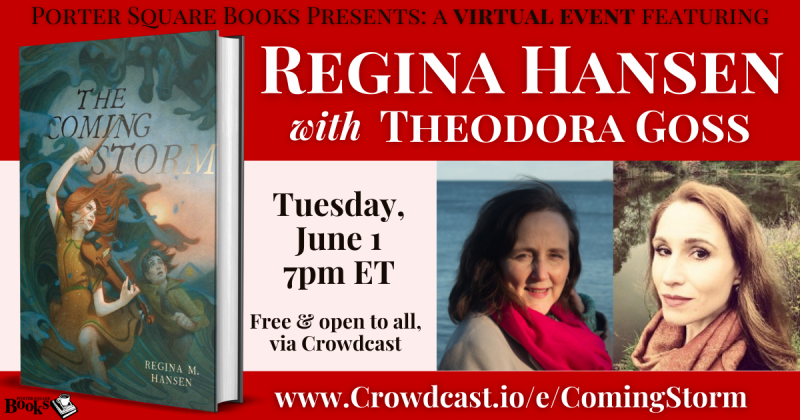 Click here to register for the event on Crowdcast: https://www.crowdcast.io/e/comingstorm

Music, myth,and horror blend in this romantic, atmospheric fantasy debut about a teen girl who must fight a powerful evil that’s invaded her Prince Edward Island home—perfect for fans of An Enchantment of Ravens.

There’s a certain wild magic in the salt air and the thrum of the sea. Beet MacNeill has known this all her life. It added spice to her childhood adventures with her older cousin, Gerry, the two of them thick as thieves as they explored their Prince Edward Island home. So when Gerry comes up the path one early spring morning, Beet thinks nothing of it at first. But he is soaking wet and silent, and he plays a haunting tune on his fiddle that chills Beet to the bone. Something is very, very wrong.

Things only get worse when Marina Shaw saunters into town and takes an unsettling interest in Gerry’s new baby. Local lore is filled with tales of a vicious shape-shifting sea creature and the cold, beautiful woman who controls him—a woman who bears a striking resemblance to Marina. Beet is determined to find out what happened to her beloved cousin, and to prevent the same fate from befalling the handsome new boy in town who is winning her heart, whether she wants him to or not. Yet the sea always exacts a price...

Regina Hansen was born on Prince Edward Island and grew up there, Montreal, and Boston. She teaches at Boston University and is also a contributor to The Ashgate Encyclopedia of Literary and Filmic Monsters. She has written regular articles for the nationally circulated children’s magazine DIG into History, and her essays have also appeared in The Wall Street Journal Review and The Conversation. The Coming Storm is her first novel. Visit her at ReginaMHansen.com.

Theodora Goss was born in Hungary and spent her childhood in various European countries before her family moved to the United States, where she completed a PhD in English literature. She is the World Fantasy, Locus, and Mythopoeic Award-winning author of the short story and poetry collections In the Forest of Forgetting (2006), Songs for Ophelia (2014), and Snow White Learns Witchcraft (2019), as well as novella The Thorn and the Blossom (2012), debut novel The Strange Case of the Alchemist’s Daughter (2017), and sequels European Travel for the Monstrous Gentlewoman (2018) and The Sinister Mystery of the Mesmerizing Girl (2019). She has been a finalist for the Nebula, Crawford, and Shirley Jackson Awards, as well as on the Tiptree Award Honor List. Her work has been translated into fifteen languages. She teaches literature and writing at Boston University and in the Stonecoast MFA Program. Visit her at theodoragoss.com.

Click here to register for the event on Crowdcast: https://www.crowdcast.io/e/comingstorm