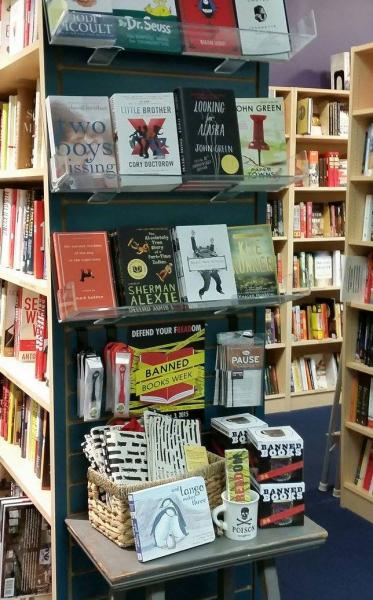 Following the American Library Association's Banned Books Week, one's thoughts return to the landmark censorship legal cases of the early '60s. Lady Chatterley's Lover; Tropic of Cancer; Naked Lunch, and Howl were all prosecuted for obscenity. Their cases were intellectual causes celebres and ultimately resulted in the dismantling of arcane censorship laws, some seemingly going back to the Puritans. These titles used to have to be smuggled into the US, and getting caught would result in confiscation, a fine and possibly, assuming a severely culturally impacted judge, jail. Nowadays D.H Lawrence barely raises a blip on the obscene-o-meter. The Miller, Burroughs and Ginsberg titles are now read mostly for (admittedly particular) fun. All four works have been made into films. (Josh’s note: For another look at the evolution of the legal definition of obscenity, see Kevin Birmhinham’s book, The Most Dangerous Book: The Battle for James Joyce’s Ulysses.)

Considering the wider question of censorship itself, one plays one's mind over its various societal and political permutations and one sees the governing principle seems to be basic clammy insecurity. Whether you're chary of the imminent doomed descent of civilization into a debauched fumarole field of decadence, or nervous about your country's citizens catching on to the particulars of the power game that made you premier or king or first chairman or president-for-life, what do you bet the motivation deep down at the center of it all is, oho, insecurity. It seems the harsher the dictatorship, the heavier the censorship. Reactionary government seems to engender puritanical societal laws (Mao, Franco, Pinochet, etc etc), the better to repress, and control, all aspects of life. When you're holding power by force, you really don't want your citizens thinking about the situation. Especially in public.

Whatever it is, it's dangerous -- and we can always use more of it.