Harry Potter and the Art of Reading Together

Announcement of the week: Our Harry Potter midnight release party will feature a Harry Potter-themed photobooth! Now, on to Bookseller Heather's blog post:

For me, reading Harry Potter was a family activity. My dad was usually the one to read books with me and my sisters, and Harry Potter was no exception. We were some of the early readers of Sorcerer’s Stone in our small town, where the buzz was growing but still quiet. After dinner we would crowd together on the couch or my parent’s bed, my father often joking that he couldn’t lift his arm to turn the pages because we were huddled too closely, pinning his elbows to his sides while we followed along as he read aloud. My older sister and I were past the crucial age of 11, but my younger sister still had a whole year to anxiously hope that a letter from Hogwarts might really appear.

Mom was always there to snap a photo, or sometimes listen along while she knit. Once as a gift, a cousin gave us wands to hold while we read, although we all agreed that she clearly didn’t understand Harry Potter because she had given us metal black-and-silver wands, like a stage magician wearing coat tails and a top hat might use. Mom started using the wands to wind her skeins of yarn. 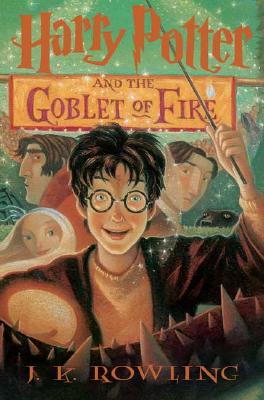 The summer that Harry Potter and the Goblet of Fire was released was particularly memorable for multiple reasons. First, this book included a phonetic spelling of Hermione’s name, and my father grievously realized that “Her-mee-own” was the incorrect pronunciation. Second, my parents had planned a vacation to Montreal and we were traveling by train. There and back, my sisters and I nabbed the set of four seats that faced each other in our train car, and forced my dad into one of those seats to read to us. Poor Mom had to settle down across the aisle by herself. I remember my father’s embarrassment when Dobby reappeared early on in the book. He tried to read Dobby’s voice plain and level, in the same manner he was narrating, and we immediately pounced on him for not using the high-pitched, squeaky intonations we associated with Dobby. Dad was already reading loudly to be heard above the noise of the engine and tracks, and he reminded us that there were other people on the train who might not want to listen to him. We couldn’t have cared less.

I think Harry Potter and the Order of the Phoenix was probably the last book that we read as a family. We were too old to be read to even then, but we liked the tradition. When the sixth book was released, I think Dad felt a little disappointed that he couldn’t share the reading experience with us in the same way. But he continued reading the series on his own, as curious to know how the series would end as his daughters were. Though we didn’t read together anymore, Harry Potter remained a family affair for a while still, as my sisters and I helped plan more than one midnight launch event.

There aren’t many books from my childhood that live on the built-in bookshelves in my parent’s living room. Most of the books there are classic novels, my parents’ books from college, and recently acquired reads. The most eye-catching books on display, of course, are the seven Harry Potter volumes, waiting to be shared again.