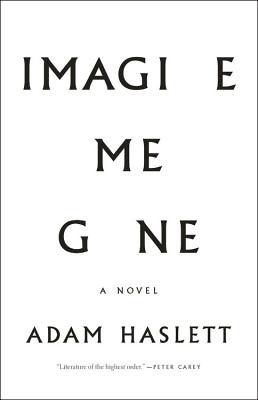 I've read more than one novel in the last year about people who are slipping into dementia, or have severe mental disabilities, or who are living with the psychological effects of a significant trauma. There's some very good fiction out there, though often showing a tendency to focus on the trauma itself, or the pain of the disintegration of a relationship as one partner slowly slips out of it.

My initial encounter with Imagine Me Gone (I had picked up the book, in an advance reader's copy, because I had been invited to dinner with the author) placed it in this category of well-written books about mental illness, as the character we first meet, John, is hospitalized for what appears to be the latest in a lifelong series of bouts with his demons. I expected a certain type of book, and I got much more. It soon became apparent that John was simply the entry point into a complicated story about his wife and three children and how all of them struggle over decades with perilous and complicated manifestations of this illness. Michael, the oldest child, has significant and complex psychological issues, magnificently on display throughout the book, which may or may not (it's never made completely clear) have a hereditary element. While the entire family is front and center, Michael is in many ways the central character of the book, and he's alternatively a brilliant and sarcastic first person narrator, an infuriating sibling and son, and a supremely self-aware hypochondriac who confronts his illness in ways his father was never willing or able to do. The result is a nuanced, unsentimental, intricate, often hilarious, and exquisitely written book about illness and family.

I picked this book as a staff pick when it came out in the spring, and I'm just as enthusiastic about it now as I was then. So I was thrilled when I found out that we got our hands on a few boxes of signed copies of the book that we can use as special giveaways. If you purchase two staff picks (they can be found here) you'll get a free signed copy of Imagine Me Gone, until we run out. Please don't treat this book as unimportant because it's free -- read it, and let us know what you think.