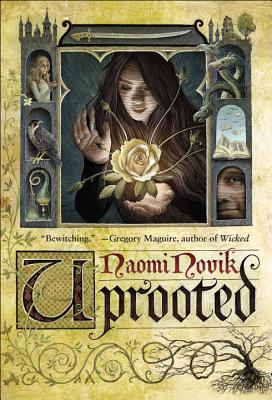 Uprooted by Naomi Novik (just out in paperback!) is the 2015 Adult Porter Square Book of the Year. (Which means it’s 20% for the rest of 2016.) Bookseller Rebecca, who originally nominated Uprooted for the award, spoke with Naomi Novik over the phone.

PSB: Uprooted made a huge splash in 2015 – it had great reviews and was named to a ton of “best of” lists, not to mention the fact that it won our inaugural PSB Book of the Year competition! Were you expecting anything like this response?

PSB: How was writing Uprooted (a standalone novel) different from writing a long series like Temeraire?

NN: What I liked about writing Uprooted was that I was going toward the end. I feel very strongly about the importance of endings. An ending should transform what came before it and give a sense of closure and satisfaction.

For myself these days, I do really feel like I want to have the ending of a project finished before I publish it. Very frequently as a writer I find I get to the end of a work and that’s when I figure out what it’s been about the whole way. There are many writers who plan a book before writing—but I find if I do that, I lose my mojo. I like to be finding things out as I’m writing.

PSB: Uprooted is so richly rooted in the sorts of fantasy novels and fairy tales I loved as a child, but with such a fresh spin! Were you thinking consciously about these story forebears as you were writing?

NN: Yes, absolutely. My mother read Polish fairy tales to me as a child. Many of those are in Uprooted, as well as several English language fairy tales. In some ways it’s a synthesis of the two.

PSB: Uprooted’s setting is based in part on medieval Poland. Were there particular historical events that helped inspire the book?

NN: Yes. I drew on the founding legends of Poland for the setting of Uprooted. The capital city (Kralia) is based on Krakow, and some characters are loosely inspired by Polish kings.

When I wrote the Temeraire series I was attempting a very realist feel and aimed for historical accuracy so that the fantastical elements (the dragons) would feel organic. But for Uprooted I wanted a more fairy tale quality. I was very consciously trying not to do too much research or ground it specifically in a place or time because for me, this book takes place in a version of Poland that existed in my head when I was five years old—a made-up place that doesn’t actually exist, but that was very real to me when I was a child. I was trying to preserve that magic—a world slightly blurry around the edges, like a watercolor.

PSB: One of the elements I loved most was the friendship between Agnieszka and Kasia. It seemed like one of the most central elements of the book.

NN: That was absolutely intended! Uprooted was written as an adult novel, but clearly has some strong young adult elements. A common thread in YA is when the protagonist (a fairly ordinary girl) is at odds with the clearly popular, pretty girl, which almost always leads to a lot of envy. But that’s not a model of female friendship or relationship that I’ve ever had. There’s not enough positivity there. Envy between friends is certainly real, and that’s something I did try to keep in the relationship. But for the most part, envy is less important than the love and respect and strength that I find I get from my friends.

I really wanted to have a relationship between Agnieszka and Kasia where it wasn’t quite as simple as Kasia being isolated and held above her peers because of her popularity. Kasia is popular for a reason—she really is amazing and wonderful, and Agnieszka truly loves her. At the same time, that doesn’t mean that Agnieszka can’t be amazing in her own ways.

I also wanted to focus on Agnieszka’s roots. In many fairy tales you get the one girl who ends up isolated, cut off from her family, friends, her home. The hero leaves behind her own life like a chrysalis in order to have adventures. I didn’t want that model. I wanted Agnieszka to keep her roots. So she fights for them. She goes back for them in a way that doesn’t diminish her self or give up her power. In that sense Agnieszka’s love for Kasia also represents her roots and her love for her family.

PSB: The second I finished Uprooted, I immediately thumbed back and reread the final confrontation between Agnieszka and the Wood-Queen. I couldn’t get enough! Are you working on anything else readers can look forward to?

NN: The last Temeraire book is finished! I’ve found a way to end it that is satisfying and true. Readers will have to give their own opinion, but it felt right to me, and it took a lot of work to get there. I hope it will provide a sense of closure without slamming the door in the reader’s face. I want to leave the kind of openness in my work that when a reader finishes it, they can imagine the characters continuing on.

After that is completely off the table (League of Dragons releases in June 2016), I have a lot of options! I have some ideas for a graphic novel based on Temeraire. And I’m also way overdue on a fan art project. The core story of that collection will be Pride & Prejudice retold in the Temeraire universe. There are always many, many ideas, and I don’t know which one is going to catch me first.

PSB: Thank you so much for speaking with us today. Last question: Are there any books you’d recommend for readers who loved Uprooted?

NN: First, a classic: Robin McKinley’s The Hero and the Crown and The Blue Sword. Careful readers might find a little Hero & Crown Easter egg in Uprooted! One recent title is Zen Cho’s Sorcerer to the Crown. It’s really a pleasure of a Regency novel combined with magic and sorcery. And lastly, Katherine Arden’s The Bear and the Nightingale. This one is a Russian-influenced fantasy due out in 2017. So, something to look forward to!