It's Not Just a Book: Camille DeAngelis

Below is a piece by Camille DeAngelis

Freshman year of college I knew two girls who both had the ambition of writing a novel. I don’t know that C. and K. ever met, but if they did, I’m not sure they’d have had much to talk about despite their common ambition. K. would tell me over dining-hall pasta each night that she was going back upstairs to start her book. Any evening now she was going to begin it, and it was gonna be amazing. I took her seriously for many more of those nights than I would nowadays.

C., on the other hand, wrote every day. “This is what I have so far,” she said shyly, handing me an old-school black-and-white marble composition notebook. It was two-thirds full, maybe more, and I could tell by the hurried quality of her handwriting that she’d spent many evenings flush with inspiration.

I wanted to write a novel too, but I wasn’t doing it, and every meal I ate with K. made me feel like more of a phony. I gave myself a hard time as if a weekly column in the student newspaper and co-writing a travel guide “didn’t count.” (It may not have been fiction, but both these projects gave me an opportunity to develop my voice, not to mention offering great training in deadline management.)

A year later I confided my ambition to the boy I was dating at the time. He was an aspiring writer too. He said, “Stop talking about writing a novel and just go to the library and put your butt in a chair and DO IT.”

I walked to the library with my laptop. I opened a new Word document and, empowered by Anne Lamott’s advice on “shitty first drafts,” I wrote a sentence. Then I wrote an entire paragraph and spent an inordinate amount of time feeling delighted about it.

I didn’t have a plot. All I had were an assortment of situations, details and anecdotes. I wrote my precious details on index cards and shuffled them endlessly, hoping they would arrange themselves into a perfect combination. I tacked the cards to the wall above my bed, and mused. With only a few years’ hindsight, I could see these early snippets of writing for the self-consciously clever or relentlessly twee beginnings they were. The important thing to note here is: they were a beginning. 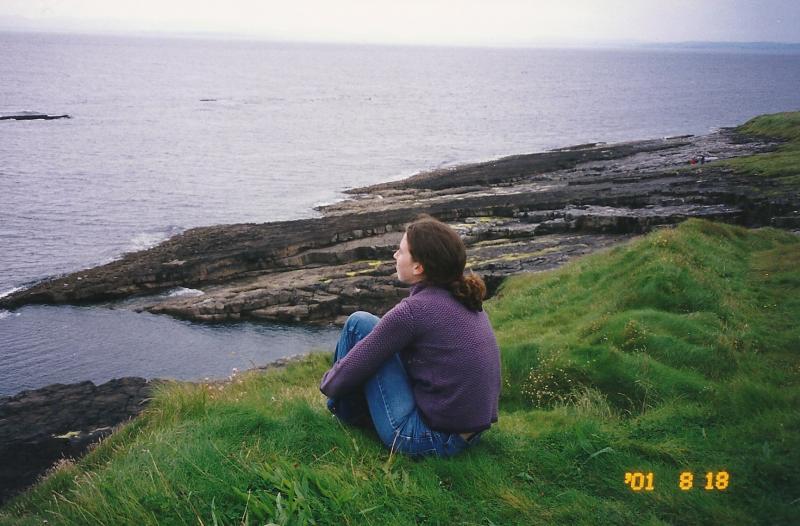 I packed a blue notebook on my second solo trip to Ireland in August of 2001, and resolved to plot the whole thing out. The highlight of this trip was several days in a sunny corner of West Cork, at a hostel in a converted 19th-century schoolhouse. A few minutes’ walk down a country lane was the tiniest beach I’d ever seen. I climbed up to a little cliff overlooking the water, and the squeals of children splashing in the surf faded as I opened the blue notebook to begin my world building in earnest.

An older British woman I’d met at the hostel—I say “older,” but she was about the age I am now, which is 36—ventured up to that overlook a little while later, and I remember feeling horrified when I glanced up from my notebook to find her sunbathing topless on a grassy ledge maybe twenty feet away. Topless sunbathing in Ireland, of all places! With all those little kids nearby!

I kept scribbling, now to conceal my embarrassment as much as for the work itself, though over the next hour or so I managed to loosen up a little. I’d overheard this woman telling someone earlier that day that her husband had recently died, that she needed to duck out of her own life for awhile. Why shouldn’t she do anything, anything at all, that might help her feel a little better?

This scene is golden in my memory, since September 11th happened less than a month later. I was studying at NYU and living in a dorm in Chinatown, and I watched the north tower burning from my friend’s bedroom window before hightailing it to Chelsea Piers to catch a ferry home to New Jersey. I kept wondering just how many people working in the towers had been writing novels on their lunch breaks. I was still here; therefore I had to write.

Over the following year I developed a habit of saying “no” to intriguing new experiences so that I could hunker down with my notebook or laptop. I could have spent a long weekend in Cinqueterre with my friends, riding the milk train between the villages along the Italian Riviera, but I didn’t. I could have spent many more hours wandering the museums, churches, and charming alleyways of Florence during my semester abroad. Some people will tell you that you must say “no” to all distractions, that this is a necessary sacrifice if you are to develop into a “Real Artist.”

But if I could live that perfect blue day in West Cork one more time, I would do two things differently. I would have gone for a swim, and reveled in the glitter of the sun on the sea. And then, tired and content, I would have laid down in the grass not far from that grieving young British woman, peeled off my bathing suit, and stayed there, naked as the day I was born, drinking in the early-evening sunshine ’til it was time to go back for dinner.

Then, of course, I would have had something to write about—something even better than this.

CAMILLE DEANGELIS is the author of the novels Immaculate Heart, Bones & All, Mary Modern, Petty Magic, the travel guidebook, Moon Ireland, and Life Without Envy:  Ego Management for Creative People. A graduate of NYU and the National University of Ireland, Galway, Camille currently lives in Boston. She is a vegan.