Porter Square Books is delighted to host Lawrence Millman to celebrate the release of his latest book, The Last Speaker of Bear: My Encounters in the North! Millman is an arctic explorer and mycologist who presents stories from his travels in a collection of vignettes that span from Yukon to Iceland. Showcasing his reverence for the Indigenous and Native communities he has encountered, including Inuit, Inuk, Innu, Alutiiq, and Cree Nations (among others), Millman invites his readers to experience his journeys with him.

This in-person event will take place on Thursday, October 27th at 7pm at Porter Square Books: Cambridge Edition. RSVP's, while not required, are strongly recommended -- just scroll down to the bottom of the page for the RSVP link! We ask that attendees wear their masks for the duration of the event. Thank you for respecting the safety of our community! 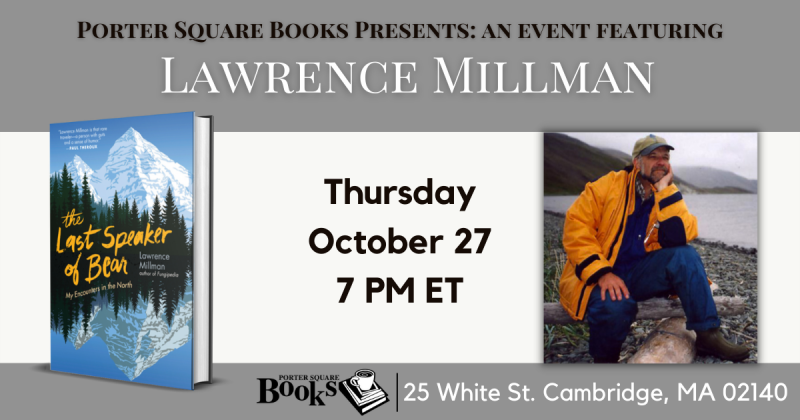 The Last Speaker of Bear is the patchwork story of a life spent traveling in the north from Alaska to Siberia. Lawrence Millman first visited northern Canada as a child and has spent four decades since on some thirty-five expeditions in search of undeveloped landscapes and traditional cultures, not to mention untamed wildlife. While much of his experience is centered in Canada--including territories from Yukon to Quebec and Newfoundland/Labrador--he includes stories from villages in Greenland, Iceland, and Norway as well.Early on, Millman developed a reverence for the wisdom of indigenous and native communities with histories spanning centuries: Inuit, Inuk, Innu, Alutiiq, Cree, and others. Whether dining on mushrooms, fungus, tobacco leaves, or unusual foods that would have made even Andrew Zimmern or Anthony Bourdain turn up their noses, or exploring northern tundras, rugged mountains, or remote islands, he paints a picture of people often living in tenuous conditions but rooted in a faith that their worlds will provide for them. Relationships with bears, caribou, reindeer, walruses, seals, whales, and abundant avian life serve spiritual, companionship, and sustenance purposes. Traditions grounded in family and community rituals thrive, as do lost languages, natural medicine, and time-honored ways to survive difficult circumstances.. In this collection of vignettes, Millman reminds us of the potency of endangered knowledge as well as the importance of paying close attention to the natural world. He opens our eyes to a life in remote places thousands of miles from the fast-paced, urban world so many of us inhabit.

Lawrence Millian is an arctic explorer and mycologist. He has taught at Tufts University, the University of Iceland, University of Minnesota, Vermont College, and Harvard University (Extension) and is the author of sixteen books, including At the End of the World and Fungipedia. He has received a Guggenheim Award, Fulbright Fellowship, and Bush Foundation Fellowship. He has appeared in major media including National Geographic, the Atlantic Monthly, Smithsonian, Sports Illustrated, Outside, the Times Literary Supplement, the Boston Globe, the London Sunday Times, and the Journal of American Folklore. He lives in Cambridge, Massachusetts.

The Last Speaker of Bear: My Encounters in the North (Paperback)