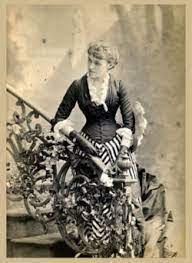 Edith Newbold Jones Wharton (1862 – 1937) was born in New York City to a wealthy and socially prominent American family.  Her mother Lucretia Rhinelander was the great-granddaughter of the heroic Revolutionary War General Ebenezer Stevens and her father’s cousin was Caroline Schermerhorn Astor, who was simply knows as THE Mrs. Astor and whose son John Jacob Astor IV perished on the Titanic (1912).

Although routinely discouraged to write, particularly by her fierce mother, young Edith wrote poems and shorts stories starting at age 13 and in the end wrote 15 novels, books of poetry, design, travel, criticism and over 85 short stories.  It is unknown if Edith Wharton ever ventured to the cinema, however in 1918 Hollywood came to her. 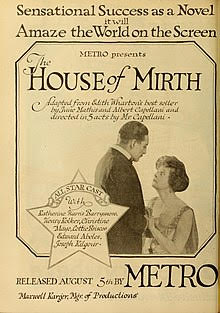 The first adaption of Wharton’s work was The House of Mirth (1905) produced by Metro Pictures in 1918.  The screenplay was written by Albert Capellani and June Mathis, the woman who discovered Rudolph Valentino. The movie was a hit and starred Katherine Harris Barrymore, the first wife of actor John Barrymore. A new adaptation of The House of Mirth wasn’t filmed until 1981 when PBS aired a new version with Geraldine Chaplin playing the sullied Lily Bart. Adrian Hall and Richard Cumming adapted the book.  The latest version in 2000 was written by Terence Davies and starred Gillian Anderson.  Shot in the UK, the film garnered good reviews, but moderate box-office. In 1923 a silent film of The Glimpses of the Moon (1922) was produced by Famous Players-Lasky, which eventually became Paramount Pictures, in 1926.  Written by E. Lloyd Sheldon and Edfrid Bingham, the film starred Bebe Daniels and was directed by Allan Dwan. 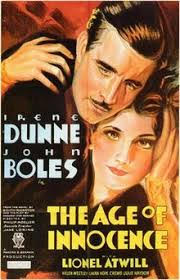 In 1924 the first adaptation of The Age of Innocence (1920) was made by Warner Brothers and written by Olga Printziau.  An actor named Elliot Dexter played Newland Archer, considered to be one of the most sympathetic characters in literature.  The next version came in 1934 with a screenplay by Sarah Y. Mason and Victor Heerman based on the 1928 play.  Starring an incandescent Irene Dunne and John Boles, the film was a box-office disappointment for RKO.  Not until 1993 was The Age of Innocence filmed again with Martin Scorsese directing and writing with Jay Cocks.  Nominated for five Oscars, the film starred Daniel Day-Lewis and Michelle Pfeiffer with Joanne Woodward doing narration. Interesting trivia:  Edith Wharton is the first woman to win a Pulitzer Prize in Literature in 1921 for The Age of Innocence. 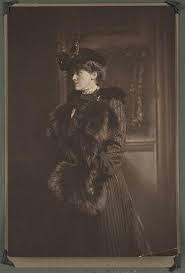 Paramount Pictures made The Marriage Playground in 1929 based on Wharton’s novel The Children (1928).  The screenplay was written by Doris Anderson, and J. Walter Ruben.  The novel was again adapted in 1990 by Timberlake Wertenbaker.  Described as “startingly beautiful” Kim Novak starred along with Sir Ben Kingsley, but it was not a box-office success.  Described as a comedy, Universal Pictures made Strange Wives in 1934.  Based on Wharton’s short story “Bread upon the Waters” (1934), the film starred Esther Ralston and was adapted by James Mulhauser.  One of the best film adaptations of Wharton’s work is The Old Maid in 1939 based on the novella: The Old Maid: the Fifties from the collection Old New York (1924) and the play adaptation (1935) by Zoë Atkins.  The film starred Bette Davis and Miriam Hopkins, two strong-willed actresses who loathed each other on and off the screen.  Interesting trivia: Humphrey Bogart was set to play Clem, but was considered “not heroic” enough so George Brent got the part. 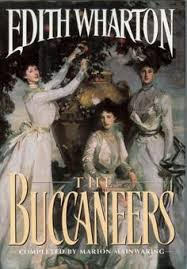 A made for television film of The Reef (1912) was made in 1996 and aired on CBS three years later.  Retitled Passion’s Way, the movie was adapted by William Hanley and starred Timothy Dalton and Sela Ward.  Although taught in high schools through the USA, Ethan Frome (1911) was only filmed once as a feature in 1983 with Liam Neeson and Patricia Arquette.  A bleak and depressing story, the movie was adapted by Richard Nelson and shot in the UK and Vermont, substituting for Western Massachusetts.  Another television adaption was of The Buccaneers (1938 – published posthumously and without an ending).  The 5-part mini-series was produced in 1995 by the BBC and adapted by Maggie Wadey.  In 1993 writer Marion Wainwaring was hired to “finish” the novel; she received deservedly harsh criticism for a very lame attempt. 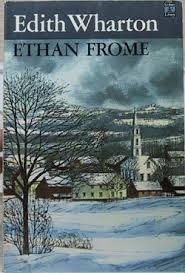 Henry James told his good friend Edith Wharton to, “write what you know,” and indeed she did.   A master of her craft, Wharton, once considered second tier in American Letters has inched her way upward and is now thought of as one of American’s premiere authors.