Porter Square Books and GrubStreet are delighted to present the latest installment in the Grubbie Debut event series, featuring Robin Mclean. Her debut novel, Pity the Beast, follows "in the footsteps of such chroniclers of American absurdity as Cormac McCarthy, Joy Williams, and Charles Portis [...] Pity the Beast is a mind-melting feminist western that pins a tale of sexual violence and vengeance to a canvas stretching back to prehistory, sideways into legend, and off into a lonesome future." Award-winning author Sabina Murray will join the author in conversation.

This hybrid event will take place in-person at Porter Square Books: Boston Edition and virtually on Crowdcast on Tuesday, October 18th at 7pm ET. For in person attendees, please note that masks and RSVPs are required to attend this event.

Register to attend virtually on Crowdcast!

Required for in person attendance: scroll down for the in-person RSVP form! 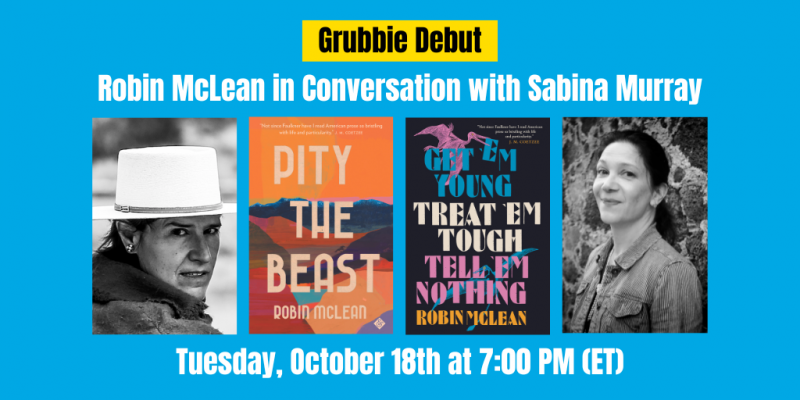 Millennia ago, Ginny's family ranch was all grass and rock and wild horses. A thousand years hence, it'll all be peacefully underwater. In the matter-of-fact here and now, though, it's a hotbed of lust and resentment, and about to turn ugly, because Ginny's just cheated on her husband Dan with the man who lives next door.

Out on these prairies, word travels fast: everyone seems to know everyone's business. They know what Ginny did, and they know Ginny isn't sorry. She might not be proud of what she's done, but she doesn't regret it either. To be honest, she enjoyed the hell out of it, and as far as Ginny is concerned, that should be the end of the story. Problem is, no one else seems able to let it go. The community can't bear to let a woman like Ginny off the hook. Not with an attitude like hers.

With detours through time, space, and myth, not to mention into the minds of a pack of philosophical mules, Pity the Beast heralds the arrival of a major new voice in American letters. It is a novel that turns our assumptions about the West, masculinity, good and evil, and the very nature of storytelling onto their heads, with an eye to the cosmic as well as the comic. It urges us to write our stories anew--if we want to avoid becoming beasts ourselves.

Robin McLean was a lawyer and then a potter in the woods of Alaska before turning to writing. Her first short fiction collection Reptile House won the BOA Fiction Prize, was twice a finalist for the Flannery O’Connor Prize, and was named a best book of 2015 in Paris Review. Her debut novel Pity the Beast, published in November of 2021, was noted as "a work of crazy brilliance" and a best book of fiction in 2021 in The Guardian, a "stunning debut novel" in New York Review of Books, as well as a best book of the year in the Wall Street Journal. Her second collection of short fiction Get 'em Young, Treat 'em Tough, Tell 'em Nothing is forthcoming from And Other Stories on October 18, 2022. She lives in the high plains desert of central Nevada.

Sabina Murray is the author of six books of fiction including the novel Valiant Gentlemen, a New York Times and Washington Post Notable Book, the short story collection The Caprices, which won the 2002 PEN/Faulkner Award, and the recently published The Human Zoo. She has been awarded fellowships from the N.E.A. and the Guggenheim Foundation. Muckross Abbey, a book of stories, is forthcoming from Grove in March ‘23. Murray teaches in the MFA Program at UMass, Amherst.