Stories from the Shadows: Reflections of a Street Doctor 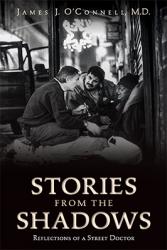 "You hold in your hands a precious gem. For this volume instantly and irrevocably transports you into a fascinating universe of individuals usually invisible to us. They are often faceless and nameless, lost in plain sight, and forced to live on the fringes of society. But this volume makes unforgettable those who are usually forgotten. The riveting stories presented here capture each life in such moving and vivid detail that you will be forever changed." —From the Foreword by Howard K. Koh, M.D., M.P.H.

Dr. O'Connell’s collection of stories and essays, written during thirty years of caring for homeless persons in Boston, gently illuminates the humanity and raw courage of those who struggle to survive and find meaning and hope while living on the streets.

A native of Newport, Rhode Island, Jim O'Connell graduated from the University of Notre Dame in 1970 and received a master's degree in theology from Cambridge University in 1972. After earning an M.D. from Harvard Medical School in 1982, he completed a residency in Internal Medicine at Massachusetts General Hospital. O'Connell began full-time clinical work with homeless individuals as a founding physician of the Boston Health Care for the Homeless Program in 1985.