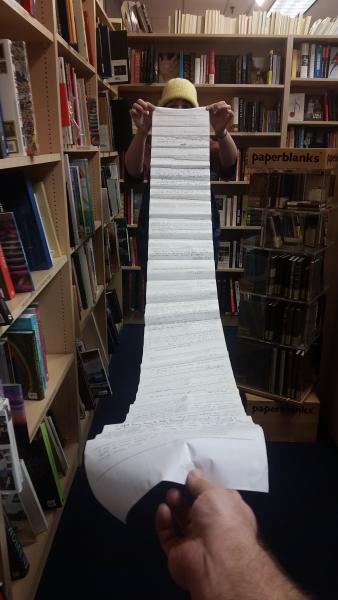 Over the year we hosted hundreds of events and got to meet hundreds of interesting authors. Since we had all of these interesting brains coming through the store, we decided to try and capture a little bit of extra creativity from all of these creative people. So we started a story-cycle (or exquisite corpse) with as many visiting authors as we could wrangle contributing one-line each to the story. Now, the authors could only see the line before theirs, so this “story” takes some interesting and unexpected turns, sometimes becoming more like poetry than like prose. We weren’t able to wrangle as many authors as we liked, but there are still moments of real beauty in this story, sharp plot twists, and a fair amount of delightful absurdity, and, despite no coordination amongst the authors, and oddly fitting ending.

Here’s the prompt that started it all:

The audience had all left and the stock for the store had been signed. It was a great event and The Author was looking forward to a quiet night in before the next leg of the tour. Unfortunately, for The Author, the parking lot outside of Porter Square Books was in utter chaos.

He decided to rent a bicycle and ride to Harvard Square even though he had a small dog with him. --Bill Morgan,  author of The Beats Abroad, 3/23/2016

This was kind of a bad idea, because when he passed a mime dressed like a Mayan Sun-god, the dog’s leash whipped around the stool the mime was standing on, sending the sun-god plummeting to the cobblestones. --Camille DeAngelis, author of Immaculate Heart 3/25/2016

The sun-god was fine, but the mime destroyed his reputation by screaming out loud. --Charlie Slack, author of Liberty’s First Crisis 4/1/16

His words were muddled though, so his warning went unheard, and the mime stood helplessly by as the moon-god eclipsed the earth. --Jennifer S. Brown, author of Modern Girls 4/6/16

And the fox cracked an egg on the old stone floor. Unfortunately, the floor wasn’t as hot as she thought, the egg refused to fry. “A pox on you moon-god!” said the fox, and turned on the stove. --Vita and Ethan Murrow, authors of The Whale 4/14/16

The stove ticked and sputtered and finally roared to life. The fox approached the stove. The heat singed his fur. His eyes flashed with anger. --Joseph Finder, author of The Fixer 4/15/16

Then he died. Not right away, though. It took time and had little to do with the fire. More to do with what happened before. --Steve Berry, author of The 14th Colony 4/15/16

As he lay mortally stricken, his skin charred by the inferno, he thought back to the the night before when Sarah asked him if he thought that the chicken tasted a little odd. --Eric Jay Dolin, author of Brilliant Beacons 4/18/16

It was the mushroom stuffing actually that was more than just odd, it was poisonous so get thee to the head quickly. --Mark Pawlak, author of Reconnaissance, 4/20/16

And the irony is that he had always hated mushrooms, saw them as alien and dangerous. But here he was, his bowels on fire and racing to the men’s room. --Paul Lewis, author of The Citizen Poets of Boston, 4/22

Until the door closed, he realized that for the first time that day, he was completely alone. He resisted the urge to check his cellphone, and looked down at his hands. The smell of mushrooms was still on them, and he thought, suddenly, of the forest, where he had once played as a child in the misty valleys of a forgotten world. There was no one left alive who had known him then, when he was nothing but sinew and breath. But he did not feel alone. He was in New York, it was 3AM. --Simon Van Booy, author of Father’s Day 5/6/16

Where was the dog? And the cat, and his wife? The birthday party for the king would have to start without them. --Mary Bonina, author of My Father’s Eyes 5/17/16

His wife was found with the king! --Marjorie R. Williams, author of Markets of Provence 5/18/18

“I guess I can’t claim prima nocta after 20 years,” muttered the lord and savior of the realm. The wife in question smirked. “Well, you might be surprised.” --Erik Fogg, author of Wedged 5/20/16

Because time begins the moment I’m with you. --Jesse Diamond, author of Swimming the Hellespont, 5/25/16

And it ends when I see my own reflection. --Lindsay Tigue, author of System of Ghosts 5/25/16

But then the elephant takes off his socks and they’re polka dot. --Jen Malone, author of Wanderlust 6/3/16

The instant the socks hit the floor, the dots leap from the fabric and stick to the skin of the elephant’s trunk. --Lori Goldstein, author of Circle of Jinn 6/3/16

When all of a sudden, the exquisite dots dance a polka, while engulfed in whirlwind of gum drops. --Marc and Max Zegans, author of The Underwater Typewriter, 6/11

Just as the dots reached a frenzy of motion, Rufus opened his mouth wide and gulped them down , one by one, until nothing was left but a sprinkle of sugar on the driveway. --Paula Whyman, author of You May See a Stranger 6/15/16

The sprinkle curled up, sniffling quiety. Rufus hardly noticed. He was sprawled on the ground gazing at a photo of someone’s grandchildren who were named Luke, Ivy, and Dashiell, wondering if they were real. --Rebecca K. Gibson, author of Opinel 6/22/16

They were real. But they hadn’t been seen since the day that photograph was taken. All of three of them and the photographer disappeared the moment the flashbulb went off. --Matt Roeser, author of Oh No, Astro! 6/24/16

What is real? Rufus asked. He really did not know. The world had turned into jelly in his hand. He could not trust the things that he saw or heard...even tasted seemed to be gone. --Kanan Makiya, author of The Rope 6/29/16

But jelly is the bed of life. --Naomi Chase, author of The Journals of Empress Galla Placidia from Her Faithful Servant Lepida  7/6/16

There’s a jelly in my belly and the world had suddenly become very small and very big all at once. --Tahmima Anam, author of The Bones of Grace 7/6/16

It’s growing. Dear god, are those...tentacles? Coming out of my nose?? I really need to get serious about going vegan. --Jilly Gagnon, author of Choose Your Own Misery: The Office 7/14/16

I think it’s time to do my best “Martin Sheen in Apocalypse Now” impression and punch my own reflection in the mirror. --Jeremy P. Bushnell, author of The Insides 7/15/16

The stubble was starting to get irritating. --Malka Older, author of Infomocracy 7/27/16

She pondered shaving him as he slept--when he was drunk, maybe, dreaming deep. Just sneak up with the later and razor and… --Max Gladstone, author of Four Roads Cross  7/27/16

Put lemons over his eyes and give him a nice facial. But then she thought maybe she should… --Gail Carriger, author of Imprudence 7/28/16

Take the dance classes after all. It’s a good way to meet people, and she thought she could stand to make a few more friends. Of course, there was the problem of the old injury, but nobody… --Carolyn Parkhurst, author of Harmony 8/2/16

In my apartment building knew about her injury and she wasn’t about to tell them. Maybe if she signed up for the tango class, she’d meet some distinguished older gentleman who’d sweep her … --Ellen Wittlinger, author of Local Girl Swept Away 8/5/16

Out and do her dishes occasionally. He looked like the kind of guy who could be properly domesticated. She was tired of layabouts who didn’t pitch in and liked to watch her work. But could he… --Andrew Black, author of John Pendleton Kennedy 8/26/16

Answer another question--the one about whether or not he believed in all that nonsense of love at first sight? Who needed that? What about love at last sight? Still in love all the way to the end. --Brendan Kiely, author of The Last True Love Story 9/8/16

I didn’t know how to tell them it wasn’t going to work. That I was leaving and wasn’t sure I would see any of this again. I thought love was enough, but I don’t even know what enough means anymore. --Clint Smith, author of Counting Descent 9/16/16

And with that, I walked out the door and into the cold night. There were no cabs in sight and my cell phone battery was bright red at 20%. --Chris Willard, author of Growing Up Mindful 9/21/16

And so I decided to sing. Into the night, up to the stars, and the moon rising through the trees and the tall buildings. And it was enough… --Martha Collins, author of Admit One 9/29/16