Memories, fears, the fog of nightmares...

Five years after a series of Dante-inspired killings stunned Boston, a politician is found in a London park with his neck crushed by an enormous stone device etched with a verse from the Divine Comedy. When other shocking deaths erupt across the city, all in the style of the penances Dante memorialized in Purgatory, poet Christina Rossetti fears her missing brother, the artist and writer Dante Gabriel Rossetti, will be the next victim.

The unwavering Christina enlists poets Robert Browning, Alfred Tennyson, and Dr. Oliver Wendell Holmes to decipher the literary clues, and together these unlikely investigators unravel the secrets of Dante’s verses to find Gabriel and stop the killings. Racing between the shimmering mansions of the elite and the seedy corners of London’s underworld, they descend further into the mystery. But when the true inspiration behind the gruesome murders is finally revealed, Christina must confront a more profound terror than anyone had imagined.

A dazzling tale of intrigue from the writer Library Journal calls “the reigning king of popular literary historical thrillers,” The Dante Chamber is a riveting journey across London and into both the beauty and darkness of Dante. Expertly blending fact and fiction, Pearl gives us a historical mystery like no other that captivates and surprises until the last page. 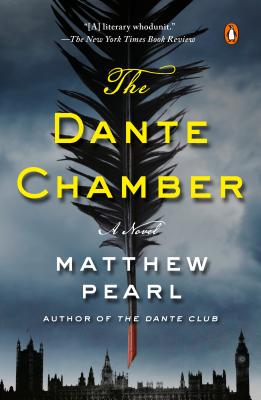