Porter Square Books: Boston Edition and GrubStreet are excited to welcome Laura Warrell for the release of Sweet, Soft, Plenty Rhythm, her debut novel! “In an exceptional debut, Warrell turns love, or at least the love life of musician Circus Palmer, into the proverbial jazz club: dark and sexy, freeing and frightening, ecstatic and lonely.... A modern masterpiece,” (Jason Reynolds, best-selling author of Look Both Ways). Steve Almond, author of All the Secrets of the World, will join the author in conversation.

This event will take place in person on Friday, September 30th at 7pm at Porter Square Books: Boston Edition and virtually via Crowdcast. Masks are required for in person attendees. RSVPs, while not required, are highly encouraged- you can RSVP to attend in person below! 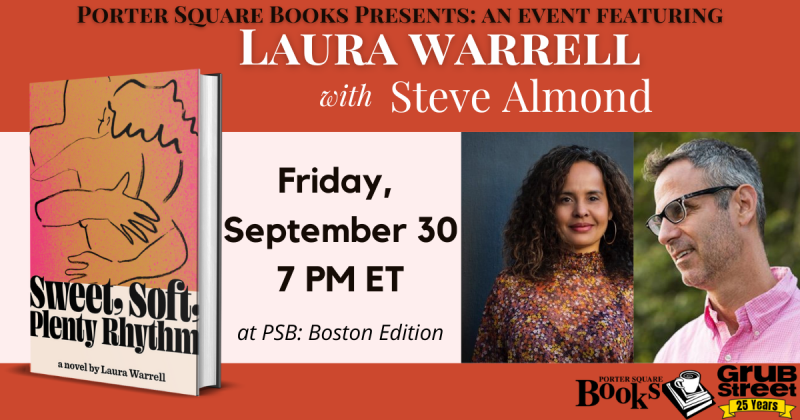 Passion and risk, fathers and daughters, wives and single women, jazz and soul: a provocative debut novel about the perennial temptations of dangerous love, told by the women who love Circus Palmer—trumpet player and old-school ladies’ man—as they ultimately discover the power of their own voices.

It’s 2013, and Circus Palmer, a forty-year-old Boston-based trumpet player and old-school ladies’ man, lives for his music and refuses to be tied down. Before a gig in Miami, he learns that the woman who is secretly closest to his heart, the free-spirited drummer Maggie, is pregnant by him. Instead of facing the necessary conversation, Circus flees, setting off a chain of interlocking revelations from the various women in his life. Most notable among them is his teenage daughter, Koko, who idolizes him and is awakening to her own sexuality even as her mentally fragile mother struggles to overcome her long-failed marriage and rejection by Circus.

Delivering a lush orchestration of diverse female voices, Warrell spins a provocative, soulful, and gripping story of passion and risk, fathers and daughters, wives and single women, and, finally, hope and reconciliation, in answer to the age-old question: how do we find belonging when love is unrequited?

Laura Warrell is a contributor to the Bread Loaf Writers’ Conference and the Tin House Writers’ Workshop, and is a graduate of the creative writing program at Vermont College of Fine Arts. Her work has appeared in HuffPost, The Rumpus, and Los Angeles Review of Books, among other publications. She has taught creative writing and literature at the Berklee College of Music in Boston and through the Emerging Voices Program at PEN America in Los Angeles, where she lives.

Steve Almond is the author of ten books of fiction and nonfiction, including the New York Times bestsellers Candyfreak and Against Football. He teaches Creative Writing at the Neiman Fellowship at Harvard and Wesleyan, as well as Hugo House, Grub Street, and numerous literary conferences. His essays and reviews have been widely published in The New York Times Magazine, The New York Times, The Boston Globe, The Los Angeles Times, GQ, The Wall Street Journal, Poets & Writers, Tin House, and Ploughshares. His journalism has received numerous awards including the top national prize for feature writing from the Society of Professional Journalists. His short stories have been anthologized in The Best American Short Stories, Best American Mysteries, Best American Erotica, and The Pushcart Prize. He serves as a literary correspondent for WBUR and appears on numerous podcasts. He lives in Arlington, Massachusetts.

About GrubStreet’s 25th Anniversary Event Series
This September, GrubStreet is thrilled to celebrate their 25th anniversary with a series of free events designed to bring the writing community together. Whether it’s your first GrubStreet event or you’ve been with us since 1997, you’re invited to join the fun this fall with free workshops, book launches, performances and readings, writing sessions, a community open house, and more to celebrate this milestone together. Learn more.

All the Secrets of the World (Hardcover)