Porter Square Books: Boston Edition is excited to welcome author Cat Fitzpatrick for the release of her first novel, The Call-Out! The Call-Out is "a fast-paced, debut tragicomedy of manners written in verse about queer (mostly trans) women that is funny, literary, philosophical, witty, sometimes bitchy and sometimes heartbreaking," written by the first trans woman to serve as Director of the Women’s and Gender Studies program at Rutgers University–Newark. Cat will be joined by fellow author Cecilia Gentili whose memoir Faltas: Letters to Everyone in My Hometown Who Isn't My Rapist is set to be published in October as well.

This in person event will take place on Friday, October 28th at 7pm at Porter Square Books: Boston Edition. Scroll down for the RSVP link below. We ask that attendees wear their masks for the duration of the event. Thank you for respecting the safety of our community! 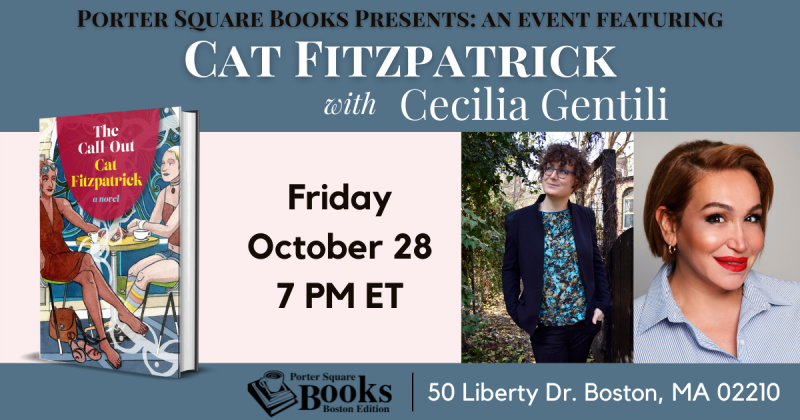 A novel written in verse, The Call-Out recalls the Russian literary classic Eugene Onegin, but instead of 19th century Russian aristocrats crudely solved their disagreements with pistols, the participants in this rhyming drama have developed a more refined weapon, the online call-out, a cancel-culture staple. In this passionate tangle of modern relationships, where a barbed tweet can be as dangerous as the narrator’s bon-mots, Cat Fitzpatrick has fashioned a modern novel of manners that gives readers access to a vibrant cultural underground.

Cat Fitzpatrick is the first trans woman to serve as Director of the Women’s and Gender Studies program at Rutgers University–Newark, and the Editrix at LittlePuss Press. She is the author of a collection of poems, Glamour­puss (Topside Press) and co-edited the anthology Meanwhile, Elsewhere: Science Fiction & Fantasy from Transgender Writers, which won the ALA Stonewall Award for Literature. The Call-Out is her first novel.

The Call-Out: A Novel in Rhyme (Paperback)

Faltas: Letters to Everyone in My Hometown Who Isn't My Rapist (Paperback)

By Cecilia Gentili
Not Available
ISBN: 9781736716823
Availability: Available with a Delay: On Order at Supplier: Email online@portersquarebooks.com for More Info
Because of how it is sold to us we cannot accept a return of this title.
Published: Littlepuss Press - October 4th, 2022