A Year in the Life of a Complete and Total Genius 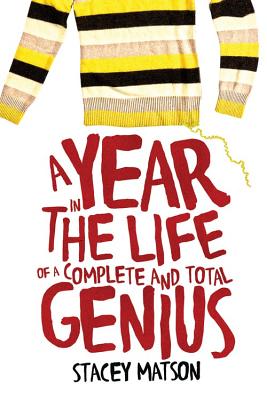 Here are some samples from the many great reviews A Year in the Life of a Complete and Total Genius by Stacey Matson has garnered.

“Arthur Bean is sure that he can write a brilliant, award-winning novel—just as soon as he gets an idea. With lots of warmth, humor, and sly wit, Canadian author Matson introduces readers to one of the funniest characters to ever cross the pages of middle-grade literature. With his story told through a series of e-mails, journal entries, and memos, Arthur Bean is a unique new voice not soon to be forgotten.”

“Though Arthur Bean is late in starting junior high school, he thinks he is a genius and wants everyone else to think so, too. He truly wants to be a writer, but he wants to follow his own rules and not those of his teachers. The only school writing assignment he enjoys is keeping a reading journal (RJ). Outwardly sarcastic and disrespectful to other classmates (particularly Robbie Zach), Arthur reveals his insecurities only in his RJ. Ms. Whitehead, his English teacher, has the patience of Job when dealing with Arthur, but even she gets worn thin and exacts her revenge by assigning Arthur to tutor Robbie Zach. Through essays, e-mails, letters, journal entries, drawings, teachers’ notes, and assignment descriptions, Matson takes readers through Arthur’s seventh-grade year. They see him develop, change, and mature, and they will grow along with him. Fans of Tommy Greenwald’s Charlie Joe Jackson series will be drawn to Arthur.”

"Readers meet Arthur Bean as he is entering seventh grade somewhat belatedly due to his mother’s death. Despite the sadness of his home life, Arthur is quick to assure his teacher that he is a gifted writer and will one day be a famous author. In fact, Arthur is so convinced of his eventual greatness that he comes across as a know-it-all in English class, completely convinced he will win the story competition at the end of the year with minimal effort. That’s probably a good thing, because with the distractions added to Arthur’s life in the form of a writing partnership with Kennedy, the popular girl, and tutoring Robbie, the boy who calls him names, the preteen has a lot on his plate. So much so, that his amazing writing turns into amazing writer’s block and his emotions, which he tries hard to hide, come out in unexpected ways. Written entirely in notes, emails, stories, and journal entries, this novel successfully captures the trials and tribulations of junior high school. As readers follow Arthur through the year, they will see him change in ways that aren’t always likable but are usually relatable and that lead to real growth.”

"Arthur Bean, a highly self-confident Canadian seventh grader, chronicles his school year through entries in his reading journal, email exchanges, and writing assignments in this humorous coming-of-age novel, Matson’s debut. Arthur hopes to kick off his career as a famous author by winning a citywide contest for young writers, but he is stumped for actual ideas. Meanwhile, Arthur’s teacher forces him to tutor his nemesis, Robbie. As the boys come to understand each other, Arthur sees that Robbie has some excellent story ideas underneath his poor grammar skills, though both boys have a crush on Arthur’s writing partner, Kennedy. Underlying these familiar middle-school dramas is Arthur’s grief over the recent death of his mother. Kennedy’s exuberant personality shines through her LOL-dotted, exclamation-point-laden emails, while Arthur’s writing makes plain his prickly brand of egotism (“Of course, there were a few poems that stood out in the sea of banality,” reads his review of an eighth-grade poetry reading). Arthur may finish the year as persnickety and opinionated as he started, but he also learns a few things about compassion, open-mindedness, and fairness.”

A Year in the Life of a Complete and Total Genius was nominated by Robin.